College president and academic administrator David Wilson was born on November 2, 1954 in McKinley, Alabama to Minnie and Henry Wilson. He graduated from Marengo County Training School in Thomaston, Alabama and went on to attend the Tuskegee Institute in Tuskegee, Alabama where he received his B.S. degree and M.Ed. degree in 1977 and 1979. He later received another M.Ed. degree and his Ed.D. degree from the Harvard Graduate School of Education in Cambridge, Massachusetts in 1984 and 1987.

In 1984, Wilson served as director of the Office of Minority Programs and as a program officer at the Woodrow Wilson National Fellowship Foundation in Princeton, New Jersey. He then became a Woodrow Wilson Foundation Administrative Fellow, serving as an executive assistant to the vice president for business affairs and finance at Kentucky State University in Frankfort, Kentucky. After graduate school, Wilson became associate provost at Rutgers, The State University of New Jersey, and was later promoted to assistant provost in 1990. In 1995, Wilson became the first African American vice president for university outreach and associate provost at Auburn University. He was also the first African American to hold a senior administrative appointment at a predominantly white university in the State of Alabama. In 2006, Wilson was hired as the chancellor of the University of Wisconsin-Extension and the University of Wisconsin Colleges, as the first person in Wisconsin to serve as chancellor of two statewide institutions simultaneously. In 2010, Wilson was appointed the tenth president of Morgan State University in Baltimore, Maryland. In 2013, Wilson helped launch Morgan State University’s School of Global Journalism and Communication. He also oversaw the completion of the University’s Earl G. Graves School of Business and Management Building in 2016. In 2018, Wilson announced Morgan State University’s collaboration with The Wharton School of the University of Pennsylvania.

In 2010, President Barack Obama appointed Wilson to serve on the President’s Board of Advisors on HBCUs. Wilson also served on the Hall of Records Commission, the Maryland Longitudinal Data System Center Governing Board, Greater Baltimore Committee, United Way of Central Maryland, Inc., the Northeast Maryland Higher Education Advisory Board, the Student Transfer Advisory Committee, the Association of American Colleges and Universities; and, in 2018, Wilson was elected to the board of directors for the Lumina Foundation.

Wilson is the recipient of the W.K. Kellogg Foundation National Fellowship and was named one of the nation’s top 100 leaders in higher education by the American Association of Higher Education in 1998. In 2010, the reading room at UW Center for Civic Engagement at UW-Marathon County was named in his honor. He was also selected as one of The Daily Record newspaper’s Influential Marylanders and was honored by the University of Alabama with an award for outstanding leadership in engaged scholarship in 2011. In 2018, Wilson received the First Citizen Award by the Maryland Senate.

Wilson has one son, Nyere.

David Wilson was interviewed by The HistoryMakers on January 18, 2019. 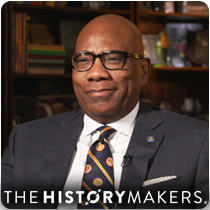