Naval officer Admiral J. Paul Reason was born on March 22, 1941 in Washington, D.C. to Bernice Chism Reason and Dr. Joseph Henry Reason. Reason graduated from McKinley Technical High School in 1958 and attended several universities before transferring to the U.S. Naval Academy in Annapolis, Maryland where he graduated with his B.S. degree in naval science in 1965. Reason then entered the U.S. Navy’s nuclear power program and earned his M.S. degree in computer systems management in 1969.

In 1968, Reason was named lieutenant and served aboard the USS Truxtun’s first deployment to Southeast Asia. From 1970 to 1973, Reason was assigned to the nuclear powered aircraft carrier USS Enterprise as an electrical officer during deployments to Southeast Asia and the Indian Ocean where he provided support for American and South Vietnamese troops. After attending the Naval Destroyer School in Newport, Rhode Island, Reason was promoted to lieutenant commander and returned to the USS Truxtun in 1974 as the ship’s combat systems officer. After a brief stint as a detailer for the Bureau of Naval Personnel in 1976, Reason was appointed to be the naval aide to President Jimmy Carter. He remained in this position until 1979 when he was promoted to commander and assigned to the USS Mississippi as the executive officer. In 1981, Reason was given his first command of the USS Coontz. He was promoted to captain, trained at the U.S. Department of Energy, and took command of the USS Bainbridge in 1983. Reason was selected for promotion to rear admiral in 1986 and served as the commander of the Naval Base Seattle, Cruiser-Destroyer Group 1 and the Battle Group Romeo. In 1991, Reason was named vice admiral and given command of the Naval Surface Forces of the U.S. Atlantic Fleet. After assignment as the Navy Operations Deputy, he became the first African American four-star admiral in the U.S. Navy and served as commander-in-chief of the U.S. Atlantic Fleet, from 1996 to 1999.

Reason served as vice president for ship systems at SYNTEK Technologies, Inc. in Arlington, Virginia; as president, COO and vice chairman of Metro Machine Corp.; and as a member of the Secretary of the Navy’s Advisory Subcommittee on Naval History. He served on the boards of Amgen, Inc., Norfolk Southern Corporation, Wal-Mart Stores, Inc. and Todd Shipyards Corporation.
Reason has received many awards and honors for his service in the U.S. military. He was awarded the Navy Distinguished Service Medal, two Legion of Merit awards, two Navy Commendation Medals and a National Defense Service Medal. Reason also received the Vietnam Service medal with seven campaign stars and a number of foreign decorations from the Republic of Vietnam and Venezuela.

Admiral J. Paul Reason was interviewed by The HistoryMakers on June 21, 2018. 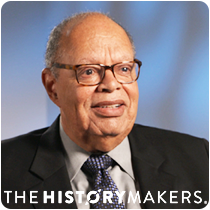