Lawyer and gallery owner Jerry Thomas, Jr. was born on June 8, 1952 in Washington, D.C to Jerry, Sr., and Estell Thomas. He received his B.A. degree in 1974 from Wesleyan University in Middletown, Connecticut and his J.D. degree in 1977 from The George Washington University Law School in Washington, D.C. He also received a certificate in International Law, Business, Trade Commerce and Negotiations in 1986 from The Hague Academy of International Law in The Hague, the Netherlands.

After graduation, Thomas went to work for the U.S. Congress as a staff aide in Washington, D.C. In the late 1980s, he served as a lawyer at the Federal Communications Commission (FCC) in Washington, D.C. Thomas was named director of administration for the 1990 Goodwill Games where he was responsible for control of the overall operation of the international event. Thomas was admitted to the Georgia State Bar in 1990. He also established the Law Offices of Jerry Thomas, LLC in Atlanta, Georgia and served as managing partner for over sixteen years. In 1995, he founded Jerry Thomas Arts in Atlanta, Georgia, where he served as owner, art broker, curator and consultant.

His collection includes works from; Romare Bearden, Jean-Michel Basquiat, Thornton Dial and Sam Middleton. In 2012, Thomas’ own Romare Bearden collection was featured when the Romare Bearden Foundation hired him to curate the art for Atlanta’s observance of the artist’s 100th birthday. In 2013, he set a record price for the sale of a Thornton Dial artwork to record producer Swizz Beatz. In 2015, Thomas collaborated with Alan Avery, owner of the Alan Avery Art Company in Atlanta, to showcase the work of Romare Bearden at an exhibition.

Thomas also has been a featured speaker at conferences, and in 2005, he delivered a speech at the National Black MBA Association Annual Conference on investing and collecting African American Art and has been quoted in the Los Angeles Times, BusinessWeek magazine, and the London Stock Exchange regarding the investment potential of African American art. Thomas also served as chair of the Fulton County Arts Council. In addition, Thomas served as a founding board member of the Edwin Moses Foundation, an initiative supporting science, technology, engineering, and math education.

Jerry Thomas, Jr. was interviewed by The HistoryMakers on March 9, 2018.

The Hague Academy of International Law

Always Strive For Perfection But Always Remember That It's an Ideal. 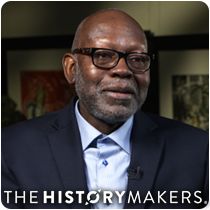 Lawyer and gallery owner Jerry Thomas, Jr. (1952 - ) was a lawyer for the Federal Communications Commission (FCC) and founded the Law Offices of Jerry Thomas, LLC and Jerry Thomas Arts.