Healthcare executive Donna Thompson was born on January 2, 1957 in Decatur, Illinois. She graduated from Stephen Decatur High School in 1975, and received her diploma in nursing from Decatur Memorial School of Nursing in 1977. She worked as a pediatric nurse at Decatur Memorial Hospital until 1980, when she became a neonatal transport nurse in the neonatal intensive care unit at St. John’s Regional Medical Center. Thompson went on to earn her B.S. degree in nursing in 1986 and her M.S. degree in nursing in 1988, both from DePaul University in Chicago. Thompson also completed the Kellogg School of Management's CEO Perspectives program in 2010.

Thompson served as the manager of the pediatric intensive care unit at Chicago’s Michael Reese Hospital from 1983 to 1991. She was then hired as the director of nursing as Advocate Christ Hospital in Oak Lawn, Illinois. In 1995, Thompson became the chief operating officer of Access Community Health Network (ACCESS) in Chicago, and was promoted to chief executive officer in 2004. Thompson organized the Stand Against Cancer program in 2002, and the Pin-A-Sister/Examínate Comadre program in 2007. Under her leadership, ACCESS became one of the largest federally qualified health centers in the country, as well as the largest provider of Medicaid and Medicare managed primary healthcare in Illinois. Thompson was also a co-founder of the Metropolitan Chicago Breast Cancer Task Force.

Thomas received numerous awards for her work in the healthcare field, including the Nursing Star Award from the Illinois Association of Visiting Nurses in 2003, the Chicago Athena Award from Athena International in 2007, the Outstanding Leadership in Continuous Quality Improvement Award from United Way of Metro Chicago in 2009, and the National Medical Fellowship Leadership in Healthcare Award in 2015. She was also named as “One of Chicago's Most Influential Women” by N’Digo Magazine in 2009. From 2003 to 2006, Thompson served as a Robert Wood Johnson executive nurse fellow. Thompson also served as a board member for Access DuPage, and chaired the board of directors for The Chicago Network. She was also a co-founder of the Metropolitan Chicago Breast Cancer Task Force.

Thompson and her husband, Robert, have two children.

Donna Thompson was interviewed by The HistoryMakers on May 4, 2018.

Stay In The Game. 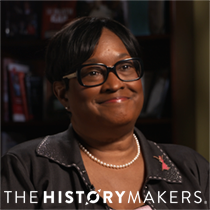