In 1968, Johnson began teaching at Pasadena Community College in Pasadena, California, where she taught political science, history, public administration, psychology and urban community development. In the same year, she was appointed vice president of Mason-Crete, an architectural planning and commercial construction firm, where she was responsible for project management systems and personnel. After receiving her Ph.D. degree, Johnson was appointed senior faculty member at the Federal Executive Institute in Charlottesville, Virginia where she trained federal, state and local government officials in public administration and personnel management. In 1976, Johnson was hired as a policy analyst and planner for the Presidential campaign of Jimmy Carter and Walter Mondale. That same year, Johnson became acting associate director of the Federal Executive Institute, where she planned and coordinated the senior executive development program and continued to serve as a senior faculty member. In 1977, Johnson became founder and CEO of Jeffalyn Johnson and Associates, Inc., a management consulting firm in northern Virginia. In 1985, Johnson and her husband, Channing Johnson, founded East West Management Systems in order to develop, own and operate a series of restaurant franchises.

Johnson also provided private consulting work for a number of companies including General Motors, Westinghouse Corporation and General Electric. Her public consulting work consisted of numerous federal agencies and for the Agency for International Development. Johnson has also held various teaching appointments at the University of Southern California, the University of Massachusetts, Amherst, Claremont Colleges Graduate School, and Occidental College.

Johnson served as a member of the National Commission on the Observance of International Women’s Year, the Angel City Links chapter of The Links, Inc., and was the national conference chair for the American Society of Public Administration.

Jeffalyn Johnson was interviewed by The HistoryMakers on July 21, 2017.

On the sand by the sea. 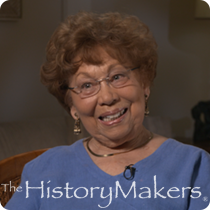 Professor and public administrator Jeffalyn Johnson (1928 - ) was associate director and senior faculty member at the Federal Executive Institute. She also served as a policy analyst for the Carter-Mondale campaign and was chair of the American Society of Public Administration.