Music administrator Frances Maclin was born on March 31, 1939 in Roanoke, Alabama to Annie Lawson and David Heard. Her family moved to Birmingham, Alabama where she attended elementary school and later settled in Detroit, Michigan where Maclin attended Garfield Intermediate School in Detroit, Michigan and graduated from Miller High School in Detroit, Michigan in 1956. Maclin later graduated from Rhema Bible College in Tulsa, Oklahoma with a certificate in pastoral studies in 1994, and received certificates in religious studies from Black Ministries in Los, Angeles California and West Angeles Four Square in Los Angeles, California in 1976 and 1977, respectively.

In 1956, Maclin worked as a file clerk for J.L. Hudson department store in Detroit, Michigan until 1959. She then moved to Los Angeles, California with her grandmother and secured a job in customer service and advertising at Bullocks department store. After a year, Maclin landed a job at May Company department store as assistant to the advertising manager. In 1961, Maclin returned to Detroit and joined the sales staff for the African American newspaper, the Michigan Chronicle, where she secured the first ad published by F.W. Woolworth’s Company in an African American newspaper. The following year, Maclin became the first tape librarian at Motown Records, and later managed the department. In 1972, when Motown relocated their headquarters to Los Angeles, California, Maclin moved and managed the organization and catalogued their California library. Maclin was entrusted with the care and storage of master recordings, along with demos, alternate takes and other footage from more than two decades of recording sessions. She also supervised and maintained the label’s photo archive. Maclin left Motown in 1986, after twenty-five years with the company and moved to Birmingham, Alabama with her husband, Charles Maclin. There, along with her husband, they managed the outreach department at the World of Life Christian Center, ministering to nursing homes, youth camps and prisons. In 1995, she became the manager of the World of Life Church bookstore until her retirement in 2014. In 2009, Maclin published her memoirs, titled I Remember Motown: When We Were Just Family.

Frances Maclin was interviewed by The HistoryMakers on May 1, 2017.

Amen and praise the Lord 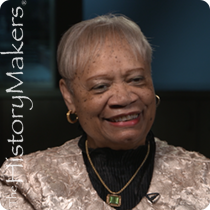 Music administrator Frances Maclin (1939 - ) was the first tape librarian for Motown Records, where she served for twenty-five years. She published her memoir, I Remember Motown: When We Were Just Family in 2009.