Entertainment host Rickey Smiley was born on August 10, 1968 in Birmingham, Alabama where he graduated from Woodlawn High School. Smiley then received his B.A. degree in English from Alabama State University in 1992 in Montgomery, Alabama.

Smiley’s career began when he participated in an amateur comedy night at The Comedy Club. After that, Smiley began touring with jazz singer Will Downing, comedian George Wallace, gospel singer Dottie Peoples and musician, Najee. He also served as the host of Black Entertainment Television's ComicView. In 2000, he entered into a five-year programming deal with Home Box Office (HBO) and in 2001, he became the host of the BET variety series The Way We Do It. Smiley made a cameo appearance in All About the Benjamins starring Ice Cube and Mike Epps, had a starring role as Santa in Friday After Next in 2002, and appeared in the character role of Ducktape in Sweet Hideaway in 2003. In 2004, he became the morning show host for Dallas’ KBFB-FM/97.9, won BET’s Platinum Mic Viewer’s Choice Award, penned an episode for his own one-hour standup special on BET's ComicView, and contributed to the documentary Super Secret Movie Rules: Sports Underdogs. In 2005, Smiley was cast in the Diamond Life reality TV series.

In 2006, Smiley scripted his own episode of Comedy Central Presents and was showcased at the 2007 Just for Laughs Festival in Montreal. In 2008, he signed a Syndicated One deal to take The Rickey Smiley Morning Show nationwide. In 2010, he appeared in Stomp the Yard 2: Homecoming in the role as Final MC. In 2011, he starred in the one-man show TV movie Rickey Smiley: Open Casket Sharp. In 2012, Smiley guest starred on the BET series Let’s Stay Together as well as executive produced and starred in the TV sitcom, The Rickey Smiley Show, which aired on TV One. Smiley also served as host of Dish Nation and appeared in the character role as Calvin in Baggage Claim. In 2015, Smiley served as executive producer for Rickey Smiley For Real a reality television show; and in 2017, he was featured as MC on the television series Star. That same year, he released his memoir Stand By Your Truth: And Then Run For Your Life, (Simon & Schuster, New York).

In 2017, Smiley received the Marconi Award for syndicated personality of the year.

Rickey Smiley was interviewed by The HistoryMakers on March 8. 2018.

The Difference Between Ordinary and Extraordinary is Only the 'Extra.' 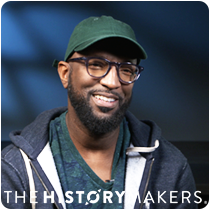