Artist and curator Henri Linton was born on September 23, 1944 in Lewiston, Alabama to Christine McMullen Linton and Readus Linton. Linton’s family moved to Tuscaloosa, Alabama in 1953, where he graduated from Druid High School in 1962. He received a four-year scholarship to attend Columbus College of Art and Design in Columbus, Ohio, where he received his diploma in fine arts in 1966. Linton went on to earn his B.F.A. degree in painting from Boston University in 1968, and his M.F.A. degree in painting from the University of Cincinnati in 1974.

In 1966 and 1968, Linton won the top award for best figure portrait at the Atlanta University National Negro Art Show. In 1971, Linton received the best show award in the Arkansas Artist Competition, and was awarded the Keeper of the Spirit Award from the University of Arkansas at Pine Bluff in 1998. Linton was inducted into the Arkansas Black Hall of Fame in 2001, and the UAPB/AM&N Alumni Hall of Fame in 2015. Linton served on the board of trustees of the Southeast Arkansas Arts & Science Center from 1990 to 1995, as founder and chairman of the Chancellor’s Benefits for the Arts from 1987 to 2014, and on the Arkansas History Commission from 2002 to 2007. Linton’s artwork is included in the collections of The Arkansas Arts Center, The Rockefeller Foundation, and the University of Arkansas for Medical Sciences.

Henri Linton was interviewed by The HistoryMakers on March 16, 2018.

Columbus College of Art and Design

If I Can Help Somebody As I Pass This Way, Then My Life Have Not Been In Vain. 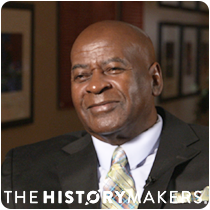 Artist and curator Henri Linton (1944 - ) chaired the art department at the University of Arkansas at Pine Bluff for over thirty years, and worked as the curator of the University Museum and Cultural Center.