Curator and arts educator Bettye J. Stull was born on June 13, 1931 in Wheeling, Virginia. After moving to Columbus, Ohio at the age of seventeen to live with her great-aunt, Stull became an administrative coordinator for the Columbus Recreation and Parks Department, where she worked for over thirty years. In 1971, Stull married ceramic artist Robert Stull, who became a faculty member with the art department at The Ohio State University in Columbus, Ohio.

In 1987, Stull retired from the Columbus Recreation and Parks Department, and became a curator at the King Arts Complex in Columbus, Ohio where she worked to develop youth art education programs and helped launch the Elijah Pierce Gallery in the King Arts Complex. In 2004, Stull retired as curator from the King Art Complex, but continued as a consultant, where she curated “Columbus Collects,” “Roots and Legacies,” “Echoes of Our Ancestors,” which featured a number of rising and established black artists, and an exhibition called “African Art Tradition & Influence: Woodrow Nash Sculptor.” In 2008, Stull curated the “Color: Ten African American Artists and Sistahs” exhibition at the Ohio Craft Museum; and in 2010, she curated an exhibition called “Evolution of the Girl Child” at the McCoy Community Arts Center in New Albany, Ohio. Stull collaborated with a Cleveland based art group called “Creative Women of Color” to curate a 2012 exhibition called “SPEAK! Women Sharing Their Voices Through Art.” Stull was also an art advisor on the Long Street Bridge “Culture Wall” Committee in Columbus, which was completed in 2014, and consisted of a collection of photographs and block prints that detail the history of Columbus Near East Side.

Bettye J. Stull was interviewed by The HistoryMakers on November 17, 2017.

Continue to do the work that needs to be done. 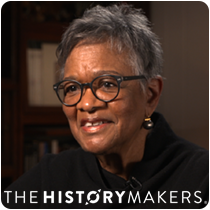 Curator and arts educator Bettye J. Stull (1931-) was an administrative coordinator for the Columbus Recreation and Parks Department for over thirty years and worked as an arts curator the King Arts Complex in Columbus, Ohio.

St. Mary of the Springs College