Accounting professor Alexander Gabbin was born on September 6, 1945 in Baltimore, Maryland. Gabbin earned his B.A. degree in economics and mathematics from Howard University in Washington, D.C. in 1967. He went on to earn his M.B.A. degree from the University of Chicago in Chicago, Illinois in 1970 and his Ph.D. degree in accounting from Temple University, Graduate School of Business in Philadelphia, Pennsylvania in 1986.Gabbin became a certified public accountant in the State of Illinois in 1971 and in the State of Pennsylvania in 1979.

Gabbin left a public accounting career with Touche Ross & Co in 1973 to work at the Chicago Urban League during its financial crisis as Deputy Executive Director- Administration. He began his teaching career in 1975 at Lincoln University in Chester County, Pennsylvania as an associate professor in the department of economics and business administration. In 1985, Gabbin joined James Madison University in Harrisonburg, Virginia as a Commonwealth Visiting Professor. In 1990, he was promoted to associate professor and in 1995 he achieved tenure and was promoted to full professor. From 1994 to 1998, he was director of the School of Accounting and program director of the School of Professional Studies.

In addition to his teaching career, Gabbin published a variety of articles in scholarly publications, including: Issues in Accounting Education, The CPA Journal, the Journal of Accounting Education, the Journal of Accountancy, Business Communications Quarterly, The Accounting Educator’s Journal and Assessment Update. Gabbin co-founded the National Black MBA Association in 1970 and is an August 10, 1994 charter member of KPMG’s PhD Project and Accounting Doctoral Students Association.
.
Gabbin received the Builders Award from Third World Press in 1978, the Accounting Educators Award of the National Association of Minority CPA Firms in 1979, the Lindback Award for Distinguished Teaching, in 1982, and the James Madison University College of Business Distinguished Teacher Award for 2005-2006. Gabbin is the only four-time recipient of the James Madison University Outstanding Teacher in Accounting Award in 1986, 1988, 1990, and 1992. In 1991, he was selected as an Adolph Coors Foundation professor of accounting, and he has been selected as a KPMG professor of accounting since 1994. Since 1998, Gabbin has chaired the Franklin D. Watkins Memorial Award selection committee of the National Alliance of African American Athletes.

In 2000, Gabbin received the National Black MBA Association Lifetime Membership Award. In 2016, he received the Distinguished Faculty Award of the Lincoln University Alumni Association, and a February 16, 2016 Senate of Pennsylvania Citation for exemplary dedication to higher education.

Alexander Gabbin was interviewed by The HistoryMakers on May 16, 2017. 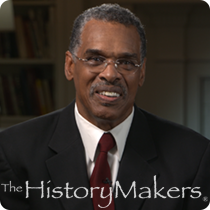