Municipal administrator Jewel Jones was born on December 7, 1941 in Oklahoma City, Oklahoma to Joseph and Jewel (neé Hathyel) Fisher. Jones received her B.S. degree in sociology in 1962 from Langston University in Langston, Oklahoma, and later obtained her M.A. degree in public administration in 1974 from University of Alaska, Anchorage.

Jones taught at the Seidman School, in Los Angeles, California in 1962 and then served as a correctional officer for the State of California Department of Corrections from 1963 to 1965, and as a probation officer for the County of San Bernardino, California from 1965 to 1967. She moved to Anchorage, Alaska in 1967 where she was hired as deputy executive director at the Community Action Agency in Anchorage from 1967 to 1970. As the social services director for the City of Anchorage from 1970 to 1987, Jones was instrumental in the establishment of the Anchorage Senior Center in 1981. She was then named social services manager for the Municipality of Anchorage and worked there from 1987 to 2000, and went on to the role of director, health & human services for the Municipality of Anchorage until 2003. Jones served on the sponsoring committee supporting the establishment of the Anchorage Urban League in 2006 and served as interim executive director of Anchorage Community Land Trust in 2007 and accepted the permanent position later that year serving for seven years until 2014.

Jones was inducted into the Alaska Women’s Hall of Fame in 2013. The Jewel Jones Community Center opened in 2016 in Anchorage’s Mountain View neighborhood, was named in her honor for her advocacy and work in community development.

Jones received the 2003 Anchorage Chamber of Commerce ATHENA Award and the Meritorious Service Award for significant public, academic, volunteer or philanthropic service to the University of Alaska community in 2016.

In addition to her public and private service career, Jones has been active on many boards and community groups, including the board of Commonwealth North, United Way of Anchorage and the board of Alaska Center for the Performing Arts. She spent eight years as the chair of the board of the Alaska Housing Finance Corporation, where she helped to ensure that senior housing projects were built across the state. Jones has worked to provide opportunities for women and minorities in Alaska and she has been active in the Alaska Black Caucus and the National Association for the Advancement of Colored People (NAACP). She currently serves as a member of the board of trustees of Alaska Regional Hospital and board member of Cook Inlet Lending Center.

Jones and her husband Maurice have two adult children, Anthony and Carmen.

Jewel Jones was interviewed by The HistoryMakers on May 21, 2018.

Sometimes, You Think Good Things Happen To Those That Keep Working At It 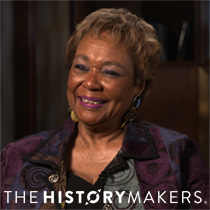 Municipal administrator Jewel Jones (1941- ) helped to establish the Anchorage Urban League in 2006, and served as the executive director of the Anchorage Community Land Trust in 2007.