After graduation, Bryant moved to Pittsburgh, Pennsylvania to host “The Al Knight Show” on WAMO-AM. He then worked for the television production center before moving to Boulder, Colorado, where he worked for the public radio station KGNU. In 1984, Bryant returned to Youngstown, where he worked as a disc jockey and film editor for the NBC affiliate WFMJ-TV. Bryant was featured in over 1,200 commercials as a voice-over artist. He also worked as a music reviewer and entertainment editor for the Call and Post and the Columbus Post. He also worked part-time at the jazz radio station WBBY and as the program director of WZZT. Bryant also served as the marketing and communications director for The Near East Area Commission, and assisted in the development of the Community 21 Cable Access initiative. In 2002, Bryant developed and produced the American Diversity Magazine television show, which aired on the Ohio News Network. In 2003, he became the news and community affairs director at WVKO in Cleveland. In 2006, Bryant accepted a position as the minority media coordinator and deputy communications director with the Ohio Democratic Party. In 2011, he became the director of news and community affairs for the Bounce TV affiliate in Columbus. In 2014, Bryant served as the executive director of the Intern Student Network Broadcast Project, an initiative aimed at training youth in Franklin County in the fundamentals of broadcast production.

Over the course of his career, Bryant produced a variety of health-based programming that targeted underserved populations in central Ohio, including his 2010 program For Goodness Sake. Bryant also won the Telly Award for excellence in broadcast journalism for a program he produced called Trailblazers: African-Americans Making a Difference.

Ron Bryant was interviewed by TheHistoryMakers on November 13, 2017.

Find someone who will pay you for what you would gladly do for free -- work your passion. 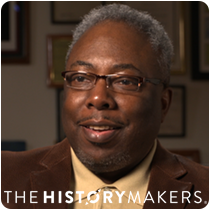 Producer Ronald N. Bryant (1952 - ), the minority media coordinator and deputy communications director for the Ohio Democratic Party, served as the director of news and community affairs for Bounce TV in Columbus, Ohio.