Judge Tyrone E. Medley was born on December 21, 1951 in Camden, New Jersey, and graduated from Camden’s Woodrow Wilson High School in 1970. He was awarded a basketball scholarship to University of Utah, and credited for his role in helping to lead the Utes team to the 1974 National Invitational Tournament championship. He received his B.S. degree in 1974, and his J.D. degree in 1977 from S.J. Quinney College of Law, from the University of Utah.

In 1978, Medley was hired as a law clerk for the Utah attorney general's office. That same year, Medley was also admitted to the State of Utah Bar, the State of Utah Federal District and the 10th Circuit Bar. He served as Deputy Salt Lake County Attorney from 1978 to 1981. He was then hired as an associate at the law firm of Cotro-Manes, Warr, Green & Shand in Salt Lake City where he worked from 1981 to 1984. His responsibilities included litigating civil matters, including transportation, personal injury, business, domestic relations, and criminal matters. Medley was appointed judge to the State of Utah Fifth District Court by Governor Scott Matheson in December 1984 and served in this capacity for eight years where he was assigned to the civil department. He presided over settlement conferences, jury and bench trials in areas of personal injury, medical, dental and legal malpractice, construction, commercial and domestic relations matters. In 1992, Medley was appointed by Utah Governor Norman H. Bangerter as a State of Utah Third Circuit Court Judge, serving Salt Lake, Summit and Tooele Counties, presiding over criminal and civil matters until July 1, 2012 when he retired and served as an active senior District Court Judge, handling private arbitration and mediation.

He has been the recipient of numerous honors and awards including the NAACP Albert B. Fritz Award in 1996, Utah State Bar Judge of the Year Award in 1998, Utah State Bar Raymond S. Uno Award in 2000, University of Utah Crimson Club Hall Of Fame in 2000, The National Conference for Community and Justice Humanitarian Award in 2005, and NAACP Dr. Martin Luther King Civil Rights Award in 2012.

Tyrone E. Medley was interviewed by The HistoryMakers on January 17, 2018.

Anywhere That Has An Ocean

Do Unto Others As You Would Have Them Do Unto You 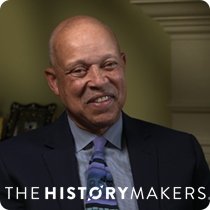