In his final year of law school, Robinson cofounded the Southern Africa Relief Fund, and after graduation, worked as a Ford Foundation fellow in Tanzania, East Africa. Upon his return to the United States, he worked as a civil rights attorney at the Boston Legal Assistance Project until 1975, when he served as speech writer in the office of Missouri Congressman Bill Clay. He worked as a staff attorney for the Lawyers’ Committee for Civil Rights in 1976, prior to serving as administrative assistant, i.e. chief of staff, in the office of Michigan Congressman Charles Diggs.

In 1977, Robinson founded TransAfrica Forum to promote enlightened U.S. policies toward Africa and the Caribbean. He served as the organization’s president until 2001, when he and his wife, Hazel, moved to St. Kitts. In 2008, Robinson was named a Distinguished Scholar in Residence by The Pennsylvania State University Dickinson School of Law, where he taught human rights law until 2016.

Robinson is a best-selling author, with his works including Defending the Spirit: A Black Life in America; The Debt: What America Owes to Blacks; The Reckoning – What Blacks Owe to Each Other; Quitting America: The Departure of a Black Man from His Native Land; An Unbroken Agony: Haiti, from Revolution to the Kidnapping of a President; and two novels: The Emancipation of Wakefield Clay and MAKEDA.

Some nineteen universities have conferred honorary Ph.D.’s upon Robinson in recognition of his work in the area of social justice advocacy, and he has been honored by the United Nations, the Congressional Black Caucus, Harvard University, Essence, ABC News (Person of the Week), The Martin Luther King Center for Non-Violent Change, the NAACP, and Ebony, among others. The Government of South Africa in 2012 conferred upon him the highest honor permissible to a non-citizen of South Africa, in recognition of his efforts to end apartheid. And the Eleanor Roosevelt Center at Val-Kill, New York, named him a 2017 medalist in honor of his work in the area of human rights.

Robinson has two children, Anike Robinson and Jabari Robinson, from his first marriage. He and his wife, Hazel Ross-Robinson, are the parents of one daughter, Khalea Ross Robinson.

Randall Robinson was interviewed by The HistoryMakers on June 13, 2017.

No longer have one - Live on small island in St. Kitts 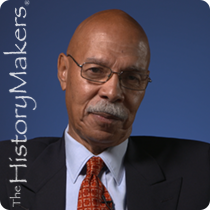 Human rights advocate, author and law professor Randall Robinson (1941 - ) was an attorney for the Boston Legal Assistance Project and served as an administrative assistant for Michigan Congressman Charles Diggs. He later founded the TransAfrica Forum and published seven books.