Lawyer Richard L. Clayter, Jr. was born on July 28, 1922, in Chicago, Illinois to Richard Clayter, Sr. and Bella Warren. Similar to many African Americans at the time, Clayter’s mother had taken part in the Great Migration of blacks out of the American South. During his childhood, Clayter still maintained ties to traditional African American communities in the South. His earliest memories are from his time in Wiggins, Mississippi. When he was only seven, Clayter experienced the Great Depression. Clayter attended William W. Carter Elementary located in the Washington Park neighborhood of Chicago’s south side. Aside from one year in Tuskegee, Alabama, Clayter attended Englewood High School located on Chicago’s south side. During this time he married his first wife, Mildred Warren, who was an orphan. Clayter graduated from high school in 1941 and soon after joined the U.S. military. His time fighting in World War II for the U.S. military would prove to be a transformative experience for Clayter.

Even after he graduated, Clayter continued to press for African American rights. In 1958, he served as counsel for Charles S. Jackson Company, Inc. in their suit against the Oak Woods Cemetery Association. The funeral association had refused, on the basis of race, to cremate several bodies brought to them by the Jackson Company. Clayter won the suit and effectively integrated the cemetery association’s crematorium. In 1959, he was the only African American in the Short Course for Prosecuting Attorneys at Northwestern University.

The recipient of many awards, Clayter was honored by two organizations with which he has a long history in 2005. He received the Outstanding Sole Practitioner Award from the Center for Disability and Elder Law with personal recognition by Attorney General Lisa Madigan. In March of the same year, Roland Burris presented Clayter with the Lifetime Achievement Award from The Original Forty Club of Chicago. A longtime member of the club of accomplished African American men, Clayter held every position in The Original Forty Club from Secretary to President.

Keep A Roof Over Your Head. 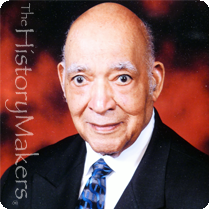 <a href="https://da.thehistorymakers.org/story/623643">Tape: 4 Story: 5 - Richard Clayter describes his experiences of racial discrimination in the judicial system</a>

<a href="https://da.thehistorymakers.org/story/623648">Tape: 5 Story: 1 - Richard Clayter talks about his working relationship with Wilson Frost, pt. 1</a>

<a href="https://da.thehistorymakers.org/story/623649">Tape: 5 Story: 2 - Richard Clayter talks about his working relationship with Wilson Frost, pt. 2</a>

<a href="https://da.thehistorymakers.org/story/623650">Tape: 5 Story: 3 - Richard Clayter lists the law firms where he worked in Chicago, Illinois</a>