Traylor served as director of evaluation procedures at the Duke Ellington School of the Arts as well as a panelist for the National Endowment for the Humanities and the National Endowment for the Arts. She also served on the board of the D.C. Black Repertory Theater Company. She was also an evaluator for the Afro-American Museums Association. In addition to working as a script writer and consultant for the Smithsonian Institution, Traylor also assisted the National Black Arts Festival as a literature consultant.

Traylor received several awards and honors for her work, including the Hazel Joan Bryant Award in 1987 as well as the Marcus Garvey Award, the Catholic University Alumni Achievement Award in literary criticism, and the Larry Neal-Georgia Douglas Johnson Award for literature and community service in 1989. In 1993, Traylor was honored with the African Heritage Studies Association Community Service Award and the Amoco Foundation’s Excellence in Teaching Award. In addition to receiving a Doctor of Humane Letters from Spelman College in 2002, Traylor was also awarded an Honorary Doctorate of Letters from Howard University in 2017.

Eleanor Traylor was interviewed by The HistoryMakers on June 23, 2018. 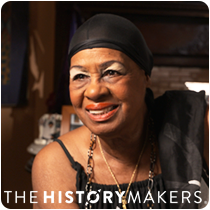