Father Darryl F. James was born on July 3, 1954 in Bridgeport, Connecticut to Laurayne Farrar James and Anthony James, Sr. His family grew up in both Richmond, Virginia and Spring Valley, New York. He earned his B.A. degree from Howard University in 1975, and his M.Div. degree from Yale University in 1979.

Upon graduation from Yale Divinity School, James was assigned to Trinity Cathedral in Newark, New Jersey, where he worked under the tutelage of Dean Dillard Robinson. He was then ordained as a deacon in 1984 at St. Matthew’s and St. Joseph’s Church, where he was also appointed Assistant for Youth and Young Adult Ministries. In 1985, James was ordained to the priesthood by the Reverend John M. Burgess in Detroit, Michigan. Later that year, James became the rector of the Messiah-St. Bartholomew Church in Chicago, Illinois, where he remained for twenty-one years. James was subsequently named to the Chicago School Board, serving from 1990 to 1995. Also in 1990, he was named the National President of the Union of Black Episcopalians. James then moved to leadership of the historic Grace Episcopal Church in Jamaica, Queens as Priest-in-Charge in 2007. Three years later, he assumed the role as church rector. A member of the Diocese of Long Island and the Queens community, James also joined the Investment Committee and the Episcopal Health Service Board of Managers, and co-founded the Downtown Jamaica Clergy. He later served as president of the Queens Federation of Churches.

James launched several initiatives at Grace Episcopal Church, including the Bishop Thompson, Jr. Summer Music and Arts Workshop, the annual Father’s Day Men of Valor Luncheon, and the Volunteers Appreciation Dinner, among others. In 2005, James, in partnership with St. Luke’s Episcopal Church, assisted Hurricane Katrina victims in New Orleans, Louisiana, providing aid and performing mission work in the region. He also participated in a pilgrimage to Northern India, visiting the Diocese of Mumbai and North India in Delhi. James also sponsored college tours for prospective college students throughout the United States.

Father Darryl F. James was interviewed by The HistoryMakers on December 13, 2016.

Grace Is The Place Where All God’s People Are Welcome To Participate In Ministry.$ 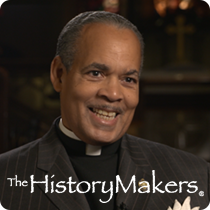 Tape: 5 Story: 2 - Father Darryl F. James talks about the need for youth in the ministry