Dancer and choreographer Bill T. Jones was born on February 15, 1952 in Bunnell, Florida. He was the tenth of twelve children born to Estella Jones and Augustus Jones, both migrant farmers. At the age of twelve, Jones’ family moved to Wayland County in upstate New York. After graduating from Wayland High School, Jones enrolled at the State University of New York (SUNY) at Binghamton where he studied dance and participated in track and field.

In 1971, Jones met Arnie Zane, a photographer, who helped him discover his destiny as a dancer. Jones and Zane joined with one of their professors, Lois Welk, to form the American Dance Asylum (ADA). Their work with the ADA eventually led to Jones’ solo debut with the Dance Theatre Workshop’s Choreographers’ Showcase in 1977. During the next few years, Jones and Zane performed internationally. In 1982, Jones and Zane formed the Bill T. Jones/Arnie Zane Dance Company. Although the dance troupe met with great success, Zane took ill in 1984; and, in 1988, he died of AIDS-related lymphoma. Jones continued to work with the troupe and created personal works that allowed him to express his grief. One such work, “Absence,” made its debut in 1989. In 1990, the troupe premiered another work inspired by Zane, “Last Supper at Uncle Tom’s Cabin.”

In addition to creating more than 140 works for his own company, Jones has been commissioned to create dances for several modern and ballet companies, including Alvin Ailey American Dance Theater, Boston Ballet, Lyon Opera Ballet, and Berlin Opera Ballet, among others. Jones directed and performed in a collaborative work with Toni Morrison and Max Roach, “Degga” (1995), at Alice Tully Hall, which was commissioned by the Lincoln Center’s Serious Fun Festival. His collaboration with Jessye Norman, “How! Do! We! Do!” (1999), premiered at New York’s City Center. In 2010, Jones was named executive artistic director of New York Live Arts, a company formed by a merger of the Bill T. Jones/Arnie Zane Dance Company and Dance Theater Workshop.

Jones’ work has been recognized with the 2010 Jacob’s Pillow Dance Award; the 2005 Wexner Prize; the 2005 Samuel H. Scripps American Dance Festival Award for Lifetime Achievement; the 2003 Dorothy and Lillian Gish Prize; and the 1993 Dance Magazine Award. Jones has also received Honorary Doctorate Degrees from Yale University, the Art Institute of Chicago, Bard College, Columbia College, Skidmore College, the Juilliard School, and Swarthmore College. He is a recipient of the State University of New York at Binghamton Distinguished Alumni Award.

Bill T. Jones was interviewed by The HistoryMakers on October 8, 2014.

Naming Things Is Only The Intention To Make Things. 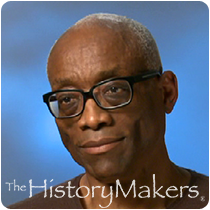 Anything My Companion Makes

Tape: 4 Story: 2 - Bill T. Jones talks about the critical reception of his work

Tape: 4 Story: 8 - Bill T. Jones describes the influence of the AIDS crisis upon his work

Tape: 6 Story: 7 - Bill T. Jones describes how he would like to be remembered