Obstetrician and gynecologist L. Natalie Carroll was born on January 26, 1950 in Nashville, Tennessee. Her father, Dr. Carl Mark Carroll, was a physician; her mother, Ruth (Carter) Carroll, a librarian. Carroll studied psychology at Lake Forest College, in Lake Forest, Illinois, for three years, then continued her education at Meharry Medical College in Nashville, Tennessee, where she earned her M.D. degree in 1974. While at Meharry, Carroll completed an externship at Howard University College of Medicine, Washington, D.C. in pediatrics, and an externship at Baylor College of Medicine, Jefferson Davis Hospital, Houston, Texas in obstetrics and gynecology. She also completed her surgery rotation at Harvard University School of Medicine, Massachusetts General Hospital in the Harvard-Meharry Exchange Program.

In 1975, Carroll became the first woman to complete a surgery internship at the Washington Hospital Center in Washington, D.C.; and, in 1978, became the first African American woman to complete an obstetrics/gynecology residency at the same facility. From 1978 to 1980, she served as chair of the Quality Assurance Review for Women’s Clinic, supervisor/chair of Routine Obstetrics/Gynecology Care, and supervisor of the Nurse Midwife/Nurse practitioner program for obstetrics and gynecology at Darnall Army Hospital in Fort Hood, Texas. In 1980, Carroll opened her own Houston, Texas-based private ob/gyn practice and was named an associate clinical instructor, staff physician and a member of the Quality Assurance Sub-Committee for Obstetrics/Gynecology at Hermann Memorial Hospital, University of Texas Health Science Center. From 1983 to 1985, she chaired the Department of Obstetrics and Gynecology at St. Elizabeth’s Hospital in Houston, and served as chairman of the Quality Assurance and Utilization Review. In 2002, Carroll was elected president of the National Medical Association (NMA), the oldest and largest organization of black healthcare professionals in the United States.

She has served on the boards of the Depelchin Children's Center and the Harris County Children's Protective Services, and on the Texas Department of Health Advisory Board Commission on Birth Defects and Genetic Abnormalities. Carroll was president of the Lone Star State Medical Association and an officer of the Houston Medical Forum. She also served as board chair of the Riverside National Bank and of the NMA. Carroll has been a member of the Alpha Omega Alpha Medical Honor Society and The Links, Inc., a Fellow of the American College of Obstetrics and Gynecology (ACOG), and a member of the Texas branch of ACOG, the Diabetic Epidemic Action Council of the American Diabetes Association, and the Stakeholders of AHRQ

Carroll’s awards include the March of Dimes' Outstanding Service Award and the NMA’s Outstanding Leadership Award for chairing the Health Policy Committee in 1997. She was honored by Aetna as a black American physician in 2002, and was named one of Ebony magazine’s 100 List of Organizational Leaders in 2003. Carroll has also received an honorary Doctorate of Science degree from Lake Forest College in Illinois, and a Distinguished Physician of the Year Award from the University of Texas Health Science Center, Memorial Hermann Hospital.

Carroll and her husband, Warren B. Dailey, live in Houston, Texas.

L. Natalie Carroll was interviewed by The HistoryMakers on May 8, 2014.

Nothing beats a failure but a try. 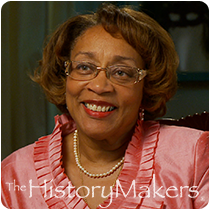 I love steak, but don't eat it much any more

Obstetrician and gynecologist Dr. L. Natalie Carroll (1950 - ) served as president of the National Medical Association from 2002 to 2003. She operated her own ob/gyn practice in Houston, Texas since 1980.