Alexander Jefferson was born on November 15, 1921, in Detroit Michigan, the first child of Alexander Jefferson and Jane White Jefferson. His great-grandfather William Jefferson White was born to a slave woman and a white slave owner in the 1830s. Jefferson’s grandfather became a minister, and in 1867, opened an all black school for boys in Augusta, Georgia, which trained its students exclusively for the ministry and pedagogy. Jefferson’s grandfather moved the school to Atlanta, Georgia, where the name changed from Atlanta Baptist Seminary to Atlanta Baptist College. Today, it is known as Morehouse College.

Jefferson grew up in a Polish neighborhood in Detroit, Michigan, and attended Craft Elementary School, Condon Intermediate School, and Chadsey High School. While in school, Jefferson spent most of his time in the biology and chemistry laboratories, at home reading from his mother’s extensive library, and building model airplanes. He graduated from Chadsey High School in 1938 as the only African-American to take college preparatory classes. Jefferson received his B.A. degree in 1942 from Clark College in Atlanta. On September 23, 1942, he was sworn into the United States Army Reserves. He volunteered for flight training but was not accepted immediately. In the mean time, Jefferson went to work as an analytical chemist for three months before entering graduate school at Howard University.

In April 1943, Jefferson received orders to report to Tuskegee Army Air Field to begin flight training. He graduated as a second lieutenant in January 1944 and was classified as a replacement pilot for the 332nd Fighter Group. Jefferson continued his training at Selfridge Army Air Field Base, where he was under the instruction of First Lieutenants Charles Dryden and Stan Watson, who had flown in combat in 1943 in North Africa with the all-Black 99th Fighter Squadron. In June 1944, Jefferson’s orders sent him to Ramitelli Air Base in Italy, where Colonel Benjamin O. Davis was the 332nd Fighter Group Commander. Jefferson flew eighteen missions before being shot down and captured on August 12, 1944. He spent eight months in the POW camp at Stalag Luft III., and was eventually freed on April 29, 1945.

Jefferson returned to civilian life in 1947, received his teaching certificate from Wayne State University, and began teaching elementary school science for the Detroit Public School System. Jefferson received his M.A. degree in education in 1954. He was appointed assistant principal in 1969 and served the Michigan School System for over 30 years. In 1995, Jefferson was enshrined in the Michigan Aviation Hall of Fame. In 2001, he was awarded the Purple Heart, and in 2007, he received the Congressional Gold Medal. Jefferson is one of the founders of the Detroit and National chapters of the Tuskegee Airmen.

Everybody In The World Is Crazy Except You And Me, And Sometimes I'm Not So Sure About You. 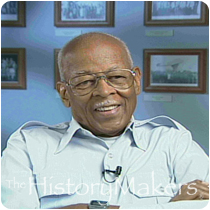 Education administrator Alexander Jefferson (1921 - ) trained for World War II at Tuskegee Army Air Field and flew eighteen missions during the war. He was shot down and captured on August 12, 1944 and spent eight months in the POW camp at Stalag Luft III. In 1947 Jefferson returned to civilian life and worked as an education and administrator in the Detroit Public Schools for over thirty years.

Tape: 1 Story: 9 - Alexander Jefferson talks about his parents' influence on his childhood

Tape: 2 Story: 2 - Alexander Jefferson describes the sights, sounds and smells of his childhood

Tape: 4 Story: 8 - Alexander Jefferson reflects upon the racial discrimination in the U.S. military

Tape: 5 Story: 1 - Alexander Jefferson recalls the downing of his plane over France

Tape: 5 Story: 5 - Alexander Jefferson describes his interrogation as a prisoner of war

Tape: 8 Story: 1 - Alexander Jefferson reflects upon his career as an educator

Tape: 8 Story: 7 - Alexander Jefferson reflects upon the legacy of the Tuskegee Airmen

Tape: 10 Story: 2 - Alexander Jefferson talks about his decision to join the Tuskegee Airmen

Tape: 10 Story: 5 - Alexander Jefferson recalls his assignment to the Selfridge Army Air Base in Michigan

Tape: 11 Story: 1 - Alexander Jefferson recalls his fighter plane being shot down over France