John Sibley Butler was born on July 19, 1947, in New Orleans, Louisiana, to Thojest and Johnnie Mae Butler. While attending the Washington Parish schools, Butler was in the honor society and played the trombone in the school band; he also was active in Little League baseball and the Boy Scouts.

Butler served in Vietnam in the 1960s. In 1969, he earned his B.A. degree from Louisiana State University. Continuing his education at Northwestern University as a Fellow of Social Change, Butler received his Ph.D. in sociology in 1974. After receiving his degrees, Butler taught M.B.A. programs in Mexico and Japan. Butler was the founding editor of the National Journal of Sociology, which he edited for 15 years. In 1988, the University of California at Berkeley sought Butler for a think tank on Testing and American Organizations.

Butler authored several books, published numerous journal articles, and was recognized with several awards. Butler was also one of the distinguished professors selected for the election committee advisory board for then Texas governor George W. Bush in 2000.

Butler became the chair of the Department of Management in the Graduate School of Business at the University of Texas at Austin in 1999; in 2002, he became the Director of the IC2 Institute where he also held the Herb Kelleher Chair for Entrepreneurship and Business and was the Sam Barshop Research Fellow. Butler served on the board of directors for Morehouse Research Institute in Atlanta, Georgia, and the Langston University National Institute for the Study of Minority Enterprise. In 2006, Butler was appointed by President Bush to the J. William Fulbright Scholarship Board; he was reappointed in 2007.

If I Tell You That A Chicken Dips Snuff, Look For The Can Beneath Its Wings. 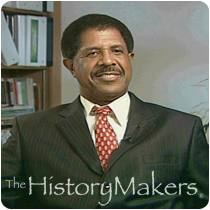 Sociology professor and academic administrator John S. Butler (1947 - ) was twice appointed to the J. William Fulbright Scholarship Board by President George W. Bush, and serves as the director of the IC2 Institute at the University of Texas at Austin.

Tape: 3 Story: 3 - John S. Butler remembers writing 'All That We Can Be' with Charles Moskos

Tape: 3 Story: 4 - John S. Butler describes the start of his career in academia

Tape: 4 Story: 2 - John S. Butler describes the differences between the North and South

Tape: 5 Story: 7 - John S. Butler describes how he would like to be remembered

DATitle
John S. Butler describes the Innovation, Creativity and Capital Institute in Austin, Texas
John S. Butler describes his experiences of teaching abroad
Transcript
What happens next in your life as far as--we're talking about, we're going into the 1990s now.$$Well I'm rearing a son [John Butler] who's my namesake, and he's finishing high school in 1995, and he attends the University of Texas [University of Texas at Austin, Austin, Texas] and finishing, finished this year, and became the fifth generation college graduate in the family, which we are very proud of. And of course I'm getting more involved into chairing things, I'm chair of the sociology department, I chair the management department and I was interim director of African American studies so, I'm getting to be an old head at the university so they're pulling on me to do administrative work. And my research is, I published a book called 'Entrepreneurship and Self-Help among Black Americans' [John S. Butler], which is a history of the greatest generation, of how people came out of slavery, within one hundred years, they created business enterprises, over one hundred private colleges and universities. And how that sort or parallels the emphasis on civil rights and how the Civil Rights Movement came out of that. And so, I'm still publishing, I'm still writing, but I'm getting more involved with this administrative stuff, and now I'm director of IC^2 Institute [Innovation, Creativity and Capital Institute] at the University of Texas where we do lots of, create companies, we have an incubator, we do a lot of research on wealth creation.$$We probably need to explore that a little bit more.$$Okay.$$IC^2 Institute, tell me more about that.$$It's an institute for innovation and creativity and it was, you know the universities are designed to, to have departments and institutes and basically we collect faculty around the, the campus and study market economies and how can market economies improve and the founder of that is George Kozmetsky, who is the former dean of the business school, Michael Dell came through his tutelage when he was at IC^2. We've built over a hundred companies, we had six companies to go public, we've created a lot of wealth, so as the component of the university engages in technology transfer, and our laboratory is not a chemistry laboratory but rather it is, like the medical students, we have a laboratory where we learn to start companies. And so what I have to manage is the IC^2 Institute and the incubator, we have a commercialization area and we get grants and instead of it being in a biology lab it's, it's a lab about wealth creation and it's kind of similar to what, similar to what Booker T. Washington did with Tuskegee [Tuskegee Normal and Industrial Institute; Tuskegee University, Tuskegee, Alabama] at the turn of the century when he had George Washington Carver creating the peanut and industries all around the peanut.$$Um-hm.$$So right now we're looking at, we have an incubator, we do clean energy, we do traditional IT [information technology], so we're doing all of the, trying to stay ahead of, here in Texas those things that would allow jobs and opportunities. Texas is a state that creates wealth, and you know that Southwest Airlines [Southwest Airlines Co.] came out of here, Dell [Dell Inc.] computers came out of here, Whole Foods [Whole Foods Market, Inc.] came out of here, National Instruments [National Instruments Corporation] came out of here, Golfsmith [Golfsmith International Holdings, Inc.] came out of here, (unclear), it just goes on and on and on. So, the thing about this state is that the University of Texas is committed to staying ahead of the industry and IC^2 is a part of that.$Did you say that you lived in Japan?$$I was a professor at Aoyama Gakuin [Aoyama Gakuin University] in Japan [Tokyo, Japan] for fourteen years in the summer, I taught an M.B.A. program, the entrepreneurship in Japan, as a fellow, from the IC^2 Institute [Innovation, Creativity and Capital Institute] as a professor at the University of Texas [University of Texas at Austin, Austin, Texas].$$What was that like living in Japan?$$Well it was very good 'cause it is so different, the language is very different, and I think the last three years I just requested to live in Japanese only hotels so I could get around, you know, (speaking Japanese), and I could, I could get a taxi, it's a very interesting language. You know I do French pretty well and I do English pretty well, I do jive very well too, by the way (laughter).$$Let me hear (laughter).$$But it was good, it was good, it was different because they have a different kind of entrepreneurial culture. It would be done I think out of large companies there, that is the individual entrepreneurial spirit is not the same as America, and Japan would solve its own future by depending probably on large companies and continuing to turn out products based on entrepreneurship, or entrepreneurship within large companies. The opposite is true of China. I was a professor in China last year, year before last.$$Um-hm.$$And the entrepreneur spirit there is much more like the Western tradition even though it's based on an economy society, what China is doing is very, very interesting and if you add the innovation to it, that is if they ever make their own televisions, their own automobiles, their own airplanes, they don't need the rest of the world for customers. And so, I think that China represents the future in a lot of ways. I think that it is gonna be a, a great competitor to innovation and job creation and web creations in America. And again, as I said earlier, staying ahead on the innovation, innovative curve, that is, what will products look like? What will manufacturing look like? Would it be nanomanufacturing, would it be biomanufacturing, becomes very important for the 21st century.
Subscribe to George W. Bush Election Committee