Noted corporate lawyer and civic leader John Windom Daniels, Jr. was born the second-oldest of eight children to John and Kathryn Townsel Daniels on June 11, 1948 in Milwaukee, Wisconsin. Daniels graduated from North Central College in Illinois with his B.A. degree in 1969 as the recipient of a National Science Foundation Fellowship. In 1970, at the age of twenty-one, Daniels became a Ford Foundation Fellow, and two years later, graduated from the University of Wisconsin with his M.S. degree.

Daniels then attended Harvard Law School, graduating with his J.D. degree in 1974. Soon after graduation, Daniels passed the bar exam, and began working for Quarles & Brady L.L.P., a full-service law firm with offices in Milwaukee, Wisconsin; Madison, Wisconsin; Chicago, Illinois and Phoenix and Tucson, Arizona. Daniels was the first African American hired by the firm. In 1980, Daniels was elected to the American College of Real Estate Attorneys. The following year, Daniels became partner at Quarles & Brady. In 1983, Daniels was appointed Bar Examiner of the Wisconsin Board of Professional Competency by Wisconsin’s governor. Daniels was named to the State of Wisconsin’s Strategic Planning Council in 1987, and the following year, the Wisconsin Supreme Court appointed him to the Children’s Hospital Foundation Review Committee for the Child Abuse Prevention Fund.

Daniels was listed as one of the best lawyers in America by Real Estate Law in 1993. In 1994, he became a partner and a member of the management committee of his firm. Daniels joined the Greater Milwaukee Foundation Board of Directors in 2004, one of the oldest and largest community foundations in the United States. 2007 marked a new milestone for Daniels, as he became the first African American appointed to lead a major law firm in Wisconsin when he was named chairman and managing partner of Quarles & Brady L.L.P.

It Is Rough Out There. 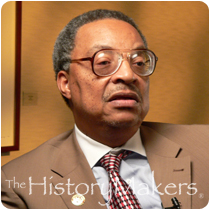 Corporate lawyer John W. Daniels, Jr. (1948 - ) was the first African American appointed to lead a major law firm in Wisconsin when he was named chairman of Quarles & Brady L.L.P. in 2007.

Tape: 7 Story: 5 - John W. Daniels, Jr. describes how he would like to be remembered