Bank president and entrepreneur Robert Earl James was born on November 21, 1946, in Hattiesburg, Mississippi, to Annie Mae and Jimmie James, Sr. James graduated from L.J. Rowan High School in 1964, after which he received his B.A. degree in accounting from Morris Brown College in Atlanta, Georgia. In 1968, James became one of the first African Americans to be accepted into Harvard Business School.

After obtaining his M.B.A. in 1970, James became President of Carver State Bank in Savannah, Georgia, one of the oldest African American-owned commercial banks. During his thirty-year tenure as President and CEO of Carver State Bank, James pioneered the re-development of Atlanta’s inner city as well as helped avert the financial crisis of Morris Brown College. In addition, James acted as Chairman of the National Bankers Association in 1978 and 1990. From 1981 to 2002, James served on the board of the Georgia Telecommunication Authority; he also purchased and revived The Savannah Tribune (now known as The Tribune). In 1989, James became the owner and publisher of The Fort Valley Herald; both are publications dedicated to the African American community.

James was recognized for his work with various honors and awards, including being named one of the 100 Most Influential Black Americans by Ebony Magazine in 2003, and being awarded the Distinguished Service Award by the National Bankers Association.

James and his wife, Shirley James, who is the editor of The Tribune, lived in Savannah, Georgia; they raised three children. 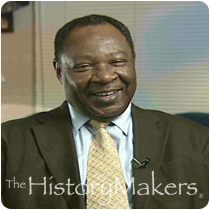 Bank chief executive Robert James (1946 - ) served for over thirty years as the president and CEO of Carver State Bank.

Tape: 1 Story: 7 - Robert James describes his father and the parent he takes after most

Tape: 4 Story: 4 - Robert James recalls his internship at The Citizens and Southern National Bank of Georgia

Tape: 4 Story: 7 - Robert James remembers the birth of his son

Tape: 6 Story: 9 - Robert James describes how he would like to be remembered