Carr worked as a customer service representative for Bankers Life Insurance Company until 1980, when he joined New York Life Insurance Company. In 1984, Carr joined Johnson Publishing Company as a salesman. Soon after, Carr was invited to work for Black Enterprise magazine in 1985. Carr was recruited to work at BET. Carr worked to convince sponsors of the viability of the African American market. Carr is president of media sales for BET and is responsible for the strategic planning to generate revenue for BET, the company's flagship; BET J, their flanker network for a mature audience, and BET.com.

Carr is also CEO and president of TV, LLC, (Tweetie Ventures) which is a real estate company that owns and manages multi-family apartment buildings in Chicago. Additionally, he is chairman of the Louis Carr Internship Foundation, which provides paid internships for students of color. Carr serves on the Board of Directors of The Advertising Council, the American Advertising Federation, the Cable Advertising Bureau and Boys Hope Girls Hope.

No Matter What People Tell You, You're Not As Good As You Think You Are. 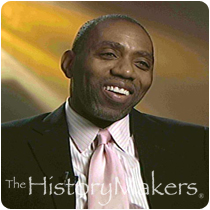 Media executive Louis Carr (1956 - ) was President of Advertising and Sales for BET. Carr was also the CEO and president of TV, LLC, a real estate company that owns and manages multi-family apartment buildings in Chicago, and chairman of the Louis Carr Internship Foundation.

Tape: 1 Story: 6 - Louis Carr talks about his father and the history behind his name

Tape: 1 Story: 8 - Louis Carr remembers his father's involvement with the Nation of Islam

Tape: 1 Story: 12 - Louis Carr describes the sights, sounds and smells of his childhood

Tape: 2 Story: 2 - Louis Carr recalls how his character was strengthened by the Nation of Islam

Tape: 2 Story: 3 - Louis Carr explains the message of The Nation of Islam

Tape: 3 Story: 11 - Louis Carr explains what made him a successful salesman

Tape: 5 Story: 5 - Louis Carr describes his mentors and the importance of giving back

Tape: 5 Story: 10 - Louis Carr describes how he would like to be remembered