Entrepreneur Michael Victor Roberts, Sr. was born on October 24, 1948, in St. Louis, Missouri to Delores Talley Roberts and Victor Roberts. He grew up the first of four siblings. The Roberts family was educated in the St. Louis Public School System, and Roberts began working as a youth, earning money doing chores around the neighborhood and delivering newspapers. Roberts heard St. Louis’ Dick Gregory talk about the Civil Rights Movement and was inspired. Graduating from Northwest High School in 1967, where he played the trombone and tennis, Roberts attended Central Missouri State University and Forest Park Community College. He met Jack Danforth at Camp Minnewanka and finished Lindenwood University in St. Charles, Missouri as a Danforth Fellow. He began his first business selling dashikis and other African merchandise to area bookstores. Roberts studied law at St. Louis University School of Law, and in 1974, earned his J.D. degree and began Roberts-Roberts and Associates, a business and construction management firm headquartered in St. Louis.

In 1976, Roberts worked as St. Louis campaign manager for Jimmy Carter, and after Carter’s election as U.S. President, he was a regular guest at the White House. One year later, Roberts was elected the youngest alderman in St. Louis. His brother, Steven C. Roberts, would claim this title two years later, serving along with Mike Jones, Virvus Jones and Wayman Smith. Roberts was the chief sponsor of the St. Louis Center and Union Station developments, and he was involved in major redevelopment efforts for the City of St. Louis.

In 1981, Roberts and his brother began Roberts Broadcasting. After establishing WRBU-TV in St. Louis, the Roberts Brothers would build eleven more television stations across the country, from Santa Fe, New Mexico to Mobile, Alabama. While building these stations, the Roberts Brothers founded Roberts Construction Company in 1989. This additional business enterprise supplemented the commercial and residential developments the brothers had established in 1982 known as Roberts Brothers Properties.

In 1999, the Roberts Brothers opened the first Sprint PCS-affiliated wireless store in Jefferson City, Missouri. It was the only PCS-affiliated company owned by African Americans. The Roberts Companies include a $460 million thirty-four-company organization, with an aviation division, a gated Bahamas community and other real estate developments. Roberts serves as chairman of the board, while his brother Steven serves as president.

Fake It Until You Make It. 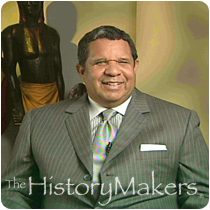 City alderman Michael Roberts, Sr. (1948 - ) was a former alderman of St. Louis, Missouri; and former campaign manager for Jimmy Carter. He and his brother Steven Roberts, Sr. co-founded the Roberts Companies, which included an aviation division, a gated Bahamas community and real estate development. He served as the company's board chairman.

St. Louis Board of Aldermen

Tape: 3 Story: 10 - Michael Roberts, Sr. recalls the development of his interest in law

Tape: 4 Story: 8 - Michael Roberts, Sr. describes his work with the St. Louis Board of Aldermen

Tape: 4 Story: 9 - Michael Roberts, Sr. reflects upon his role at the St. Louis Board of Aldermen, pt. 1

Tape: 5 Story: 1 - Michael Roberts, Sr. reflects upon his role at the St. Louis Board of Aldermen, pt. 2

Tape: 8 Story: 3 - Michael Roberts, Sr. talks about the success of The Roberts Companies

Tape: 8 Story: 5 - Michael Roberts, Sr. talks about the challenges he faced in business

Tape: 9 Story: 3 - Michael Roberts, Sr. describes how he would like to be remembered

Entrepreneur Andrew Ingraham was born on August 20, 1954, in Nassau, Bahamas, where his family owned several businesses, including one in the travel industry. After completing his education, he moved to Fort Lauderdale, Florida, where he began his career in the travel and tourism industry.

In 1999, Ingraham became the president/CEO of the National Association of Black Hotel Owners, Operators and Developers, Incorporated, an organization created to empower African American in the hospitality industry. Ingraham is also the president of Horizons Marketing Group International, which focuses on African American and multicultural tourism.

Ingraham lives in Fort Lauderdale, Florida, with his family. 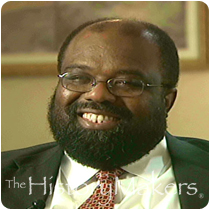 Association chief executive Andrew Ingraham (1954 - ) is the president and co-founder for the National Association of Black Hotel Owners, Operators and Developers; and is president of Horizons Marketing Group International. He has served on the White House Conference on Tourism and the National Tourism Advisory Committee for the NAACP.

Tape: 1 Story: 4 - Andrew Ingraham talks about slavery in the Bahamas

Tape: 1 Story: 11 - Andrew Ingraham remembers his childhood in the Bahamas

Tape: 2 Story: 3 - Andrew Ingraham recalls perceptions of racism during his childhood in the Bahamas

Tape: 3 Story: 2 - Andrew Ingraham describes the sights, sounds and smells that remind him of childhood

Tape: 5 Story: 5 - Andrew Ingraham describes the effect of politics on his work in tourism

DATitle
Andrew Ingraham remembers how travel agencies overlooked African Americans
Andrew Ingraham recalls working with the Asian American Hotel Owners Association
Transcript
And then of course as I began to look at travel, I began to notice that there was a huge market. And, again, the bulk of Bahamians coming here were black Bahamians, and I began to think about a market here called minority markets, black markets, and so forth. And what started off as a, as a--trying to build a company to, to take in Bahamian travelers here, I began to look at the U.S. marketplace, and at that time, I was living in Fort Lauderdale [Florida] in Hollywood [Florida] maybe. But began to think about, gee, what about getting black people to come to Florida?$$The United States black people to come to Florida? Or?$$The United States black people to come to Florida. Because--$$Was--were black people not visiting Florida at a (simultaneous)--$$(Simultaneous) Well, remember--$$--great rate?$$--in the '80s [1980s] and '90s [1990s], there were no efforts to go after the sort of expenditure that black people were doing in traveling. And so we began to look at--I discovered that when I created the program for the Bahamas, that it had some limitations, X amount of people traveling, a lot of people travel. And so as an extension, I started doing other--looking at developing small travel programs here in the U.S. And I'm trying to remember how I became--because even during--was I doing that part-time? I think in the beginning I started doing it part-time and eventually struck out on my own. But, let me just make sure. Because once I started the travel program, started looking at the market from an African American perspective traveling, and then trying to convince the convention and visitors bureau [Broward County Convention and Visitors Bureau; Greater Fort Lauderdale Convention and Visitors Bureau, Fort Lauderdale, Florida] first in Fort Lauderdale that you ought to look at to see how you can bring more black people to Broward County, Fort Lauderdale--$I formed a relationship with the Asian American Hotel Owners Association. The largest minority owners of hotels in this country are Asian Americans or Indian owners. They own out of the 48,000 hotels in this country, they own roughly about 20,000 hotels. They employ a million people. They--their value of those hotels are roughly about $40 billion. And they own roughly 32, 33 percent of the industry. When we started looking at ownership, I started working with them, partnering with those guys because they had the experience. That experience has transposed itself into a relationship with our organization [National Association of Black Hotel Owners, Operators and Developers, Inc.] and our members that, today, we have a very, very close relationship in that they are now investing with African Americans, they're selling hotels to African Americans, they're partnering with African Americans, they're financing hotels. And then recently, I encouraged the Hispanics to get into the hotel business, and I'm happy to report as of today, a new association called the Hispanic Hotel Owners Association, again, who we will partner with in--at our summit in Atlanta [Georgia]--we bring all these folks together to look at opportunities.
Subscribe to National Association of Black Hotel Owners, Operators and Developers