Civic leader John Edward Moore, Sr. was born on January 11, 1923 in Birmingham, Alabama. His parents, Ausro and Gertha Jones Moore moved the family to Dayton, Ohio shortly after he was born. Moore attended Washington Elementary School, Steele High School and graduated from Wilbur Wright High School in 1941, just prior to World War II. Working briefly as a civilian at Wright Patterson Air Force Base (WPAFB), Moore was drafted into the United States Army in 1943. Serving in the 2261st Quartermaster Trucking Company in Bangladesh, he earned the rank of corporal.

In 1946, Moore returned from World War II and was hired as a clerk at WPAFB. In 1955, he finished his B.S. degree from the University of Dayton in business administration and went on to pursue graduate studies at Ohio State University. Moore became the first Equal Employment Opportunity officer at WPAFB in 1960. In 1972, Moore became WPAFB’s first African American chief of Civilian Personnel, one of the largest government employers in the nation. Moore retired in 1979.

Over the years, Moore has served the Dayton community as a civic leader. He has served on more than fifty boards and committees. In 1972, Moore was appointed to the Dayton Foundation board by Mayor James H. McGee, has served as chair of the board, is a founding member of its African American Community Fund and is current chair of the Diversity Task Force. He was co-chair of Parity, Inc., is a member of the Black Leadership Development Program Steering Committee, a trustee of the Med America Health Systems Corporation, a member of the United Way Public Policy Committee, Job Center Governing Board, Montgomery County Out of School Task Force, Montgomery County Workforce Policy Board, Montgomery County Workforce Policy Board Youth Council, chair of the Montgomery County Mentoring Collaborative Advisory Committee, vice chair of Mound Street Academies, treasurer of Family and Children First Council and Executive Committee, and co-chair of Mary Scott Nursing Center Capital Campaign. Moore has received a myriad of awards including the 1994 Big Brothers and Big Sisters “304 Service Award”; 1995 Leadership Dayton Emeritus Award; 1997 Montgomery County Citizen of the Year Award; Honorary Doctor of Humane Letters from the University of Dayton (1998); 2000 Chamber of Commerce President’s Club Award; Ohio Association of Community Colleges 2001 Maureen C. Grady Award; 2003 Dunbar State Memorial Award and the 2005 Fred Shuttlesworth Humanitarian Award.

In 2000, the $13 million John E. Moore, Sr. Technology Center was opened on the campus of Sinclair Community College. Moore, whose wife, Hester, passed away in 2004, has two grown children. 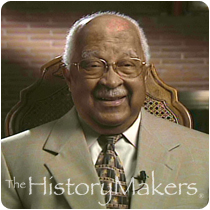 Tape: 3 Story: 6 - John Moore describes his career in the civilian service for the U.S. military

Tape: 4 Story: 7 - John Moore describes his civil rights activities since his retirement in 1979

Tape: 5 Story: 1 - John Moore reflects upon his success in his career and volunteer work

Tape: 5 Story: 4 - John Moore describes serving on the boards of The Dayton Foundation and the United Way

Tape: 6 Story: 4 - John Moore describes his hopes and concerns, and how he would like to be remembered

DATitle
John Moore recalls the segregated U.S. Army during World War II
John Moore describes his career in the civilian service for the U.S. military
Transcript
I guess the culture in those places, was that culture kind of like surprising and disturbing to you? I mean, well, was it different from Dayton [Ohio] going (simultaneous)--$$(Simultaneous) Absolutely.$$--to North Carolina and Texas?$$Yes, even though Dayton had its segregation, like I went to a mixed school here. When I got to the South, actually I got put in jail twice. First time--well I didn't get put in jail the first time, I graduated from boot camp, basic training, and it was Christmas Eve, and I walked outside the gate. I was gonna go to Greensboro [North Carolina], and I got on the bus and forgot, and sat down on the long seat behind the bus driver, and he drove about a block, and he got up, pulled his pistol, stuck it in my ear and said, used the N word, "Get to the back of the bus." I said, "No that's not necessary, just open the door, let me off." And I got off and walked back to camp and spent the holiday at camp. And then they took us--in Augusta [Georgia] there was a disturbance of some sort, and they took everybody back to camp and I'm saying these things because this is the kind of environment we were in, and not necessarily because I'm bitter, but simply because these are the facts. Someone had done something in Augusta. And of course all of the G.I.s were within a two or three block area, if you were a black G.I. because that was the only place you were tolerated, and somebody had done something elsewhere in the area, and they gave everyone including firemen and civilian whites arms, even though we were in uniform, you know, and in town on pass. We didn't have any arms or anything so they loaded us up on trucks and took us back to camp because everyone would see then. They said that was the first time they took everybody on a picnic the next day, to kind of cool things down because the guys wanted to go back, kind of changed the scenery in Augusta. But at any rate that was another real bad experience, and then next time I was in Macon [Georgia] and it was in the middle of the month, and I had gotten some money I guess, and a friend of mine from New Orleans [Louisiana], we went to a club. You had to ride the bus, you didn't have any other transportation. So after we left the club we came back to the bus stop. And in those days the black G.I.s would get in the front of the line no matter who got there first because the bus opened and loaded up. You could get to the back of the bus without having to squeeze by anybody, so we were the tour bus, only two blacks and Harry [ph.] were standing there in line to get on the bus, and two white men came down and said, "Them's the two," again, said, "them's the two Ns," and my friend just knocked the first one down and I said, "Oh my gosh," I said, "where's the MPs [military police]," I wanted to go--I wanted to get arrested. But we were. The MPs came, and they took us to the civilian jail, and they kind of beat us up pretty good, and then our company commander came the next morning and bailed us out so to speak, took us back to camp. Turned out that they were two firemen that had an altercation with some other G.I.s, not us, and we didn't even know what had happened, but that was just the tenor of the times. And when you were in these different camps at that time you were in segregated physical facility.$And then about nineteen--let me see, '57 [1957], that's when I built this house. They decided that they were gonna move to Arlington, Virginia, and I decided I wasn't going because I didn't want my kids, I had two children by that time, to be involved in that segregated school system, which I knew as a kid. So I decided to take my chances and there was--there was five people left out of that pretty large organization at that time, and I was left here [Wright-Patterson Air Force Base, Dayton, Ohio] in a liaison office, and I stayed there until 1960. And in 1960, well I had been--I had helped to transition all the people and all those documents and equipment and furniture and everything else to Arlington. In the meantime, I had made some presentations and somebody thought I did a pretty good job I guess. So then they established a plans and procedures office in the personnel division for both military and civilian personnel. So I was asked to head that office, and I did that for about six years, and kind of sort of at the end I became the first equal employment opportunity officer for the base.$$Now this is in nineteen--$$That was in about--well, 1960s when I went into that plans organization, and then about 1965, I did the equal opportunity program job, and I did the planning job for a little while concurrently, and then they moved the planning part, and I just did the equal employment opportunity thing until 1972, and then I became chief of the personnel office.
Subscribe to Black Leadership Development Program