Baseball player Hank Aaron was born on February 5, 1934 in Mobile, Alabama to Estella Aaron and Herbert Aaron. He attended Central High School in Mobile, Alabama and transferred to the private Josephine Allen Institute, where he graduated in 1951. While finishing high school, Aaron played for the Mobile Black Bears, a semi-professional Negro league baseball team.

In 1951, Aaron signed with the Indianapolis Clowns of the Negro American League, where he played for three months before his contract was purchased by the Boston Braves. Aaron was assigned to the Eau Claire Braves, the Class-C minor league affiliate for the Boston Braves and was named Rookie of the Year in 1952. The next season, Aaron was promoted to the Jacksonville Braves, the Class-A affiliate in the South Atlantic League. The following year, Aaron was invited to spring training for the newly relocated Milwaukee Braves and was offered a major league contract. In 1954, he made his major league debut with the Milwaukee Braves. By 1955, Aaron was named to the National League All-Star roster and captured his first National League batting title in 1956. The following season, Aaron won the National League MVP Award and led the Braves to win the 1957 World Series. Aaron went on to lead the Braves to another pennant championship in 1958, and received his first Golden Glove Award. In 1965, the Milwaukee Braves moved to Atlanta, where he became the first franchise player to hit his 500th career home run; and in 1970, he was the first Brave to reach 3,000 career hits. On April 8, 1974 Aaron broke Babe Ruth’s all-time homerun record with 715. Aaron was then traded to the Milwaukee Brewers for the 1975-1976 season, when he broke the all-time RBI record. After the 1976 season, Aaron retired from professional baseball and returned to the Atlanta Braves organization as an executive. In 1982, he was inducted into the Baseball Hall of Fame and was then named the Braves’ vice president and director of player development. Aaron continued to serve as vice president of the Braves. He also owned several car dealerships in Georgia and owned over thirty restaurant chains throughout the country. In 1990, he published his memoir I Had a Hammer.

Aaron was awarded the Spingarn Medal in 1976, from the NAACP. In 1999, Major League Baseball announced the introduction of the Hank Aaron Award to honor the best overall offensive performer in the American and National League. Later that year, Aaron was ranked fifth on The Sporting News' list of the 100 Greatest Baseball Players, and was elected to the Major League Baseball All-Century Team. In 2001, Aaron was presented with the Presidential Citizens Medal by President Bill Clinton. He also received the Presidential Medal of Freedom, from President George W. Bush in June 2002.

Hank Aaron was interviewed by The HistoryMakers on October 1, 2016. 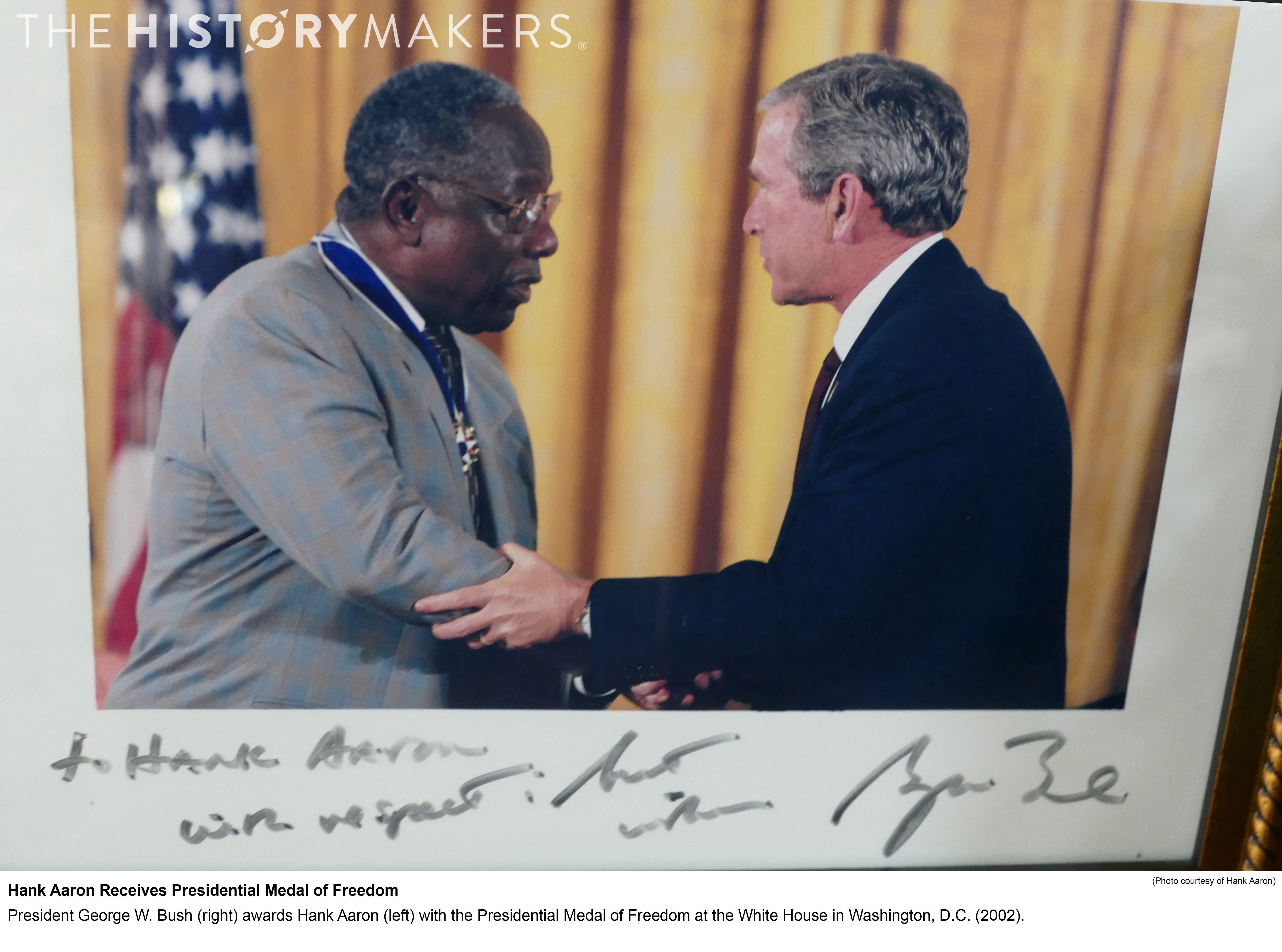 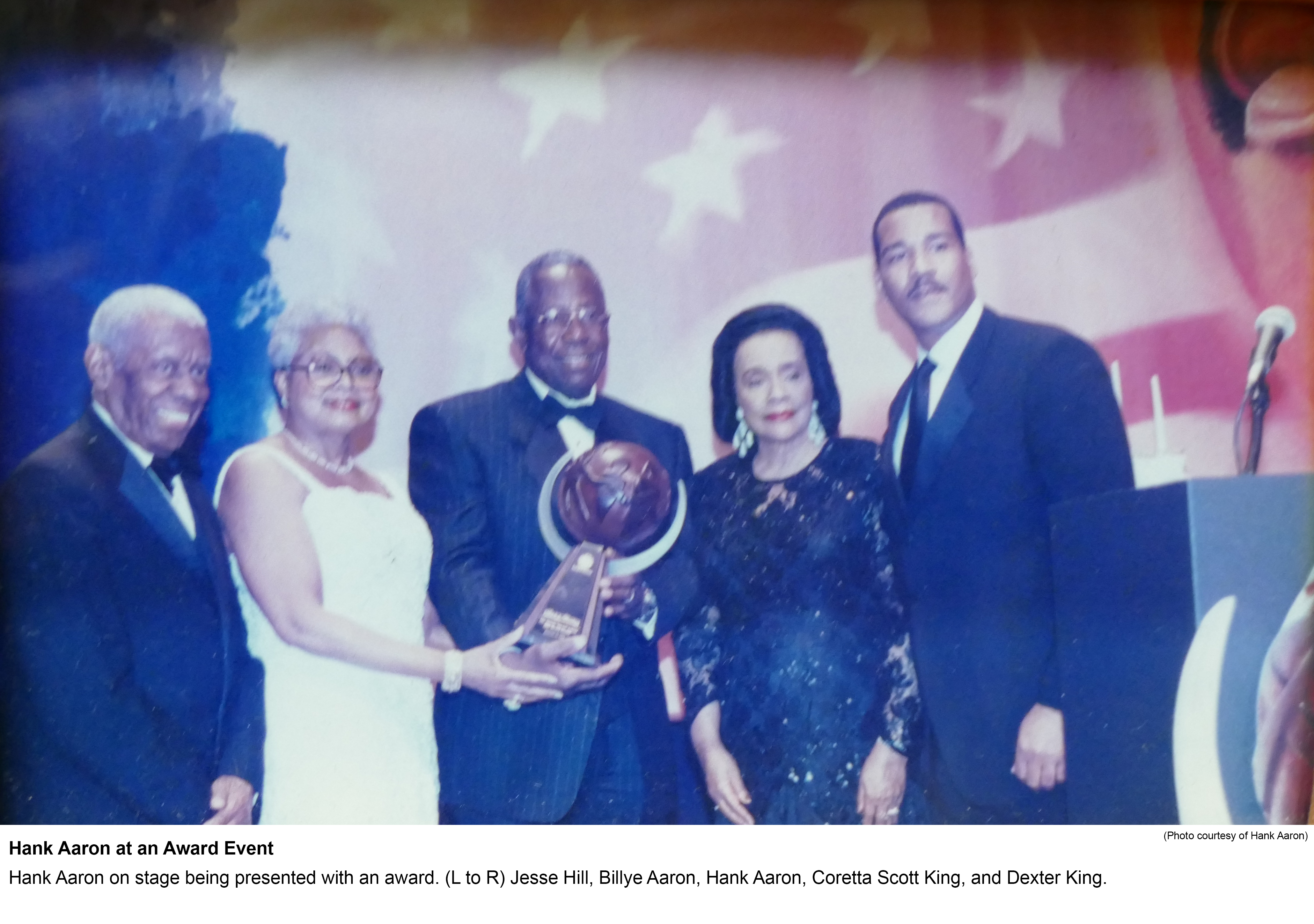 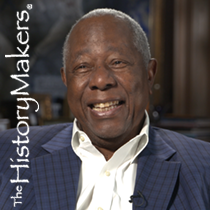 Baseball player Hank Aaron (1934 - ) began his career in the Negro Leagues with the Indianapolis Clowns. He led the Milwaukee Braves to a 1957 World Series title, and broke Babe Ruth’s home run record in 1974.

Tape: 1 Story: 4 - Hank Aaron describes his parents' personalities and who he takes after

Tape: 1 Story: 10 - Hank Aaron talks about the limited resources for sports in his community

Tape: 1 Story: 13 - Hank Aaron talks about the lack of African American athletes in the South

Tape: 2 Story: 3 - Hank Aaron talks about the prominent baseball players of his time

Tape: 2 Story: 7 - Hank Aaron recalls the prejudice he experienced while playing for the Jacksonville Braves, pt. 1

Tape: 2 Story: 8 - Hank Aaron recalls the prejudice he experienced while playing for the Jacksonville Braves, pt. 2

Tape: 3 Story: 2 - Hank Aaron talks about his positions with the Milwaukee Braves

Tape: 3 Story: 5 - Hank Aaron talks about the lack of diversity in the American League

Tape: 4 Story: 2 - Hank Aaron remembers his experiences with segregation while traveling with the Milwaukee Braves

Tape: 5 Story: 3 - Hank Aaron talks about the popular batters of his time

Tape: 6 Story: 3 - Hank Aaron remembers being inducted into the National Baseball Hall of Fame and Museum

Tape: 6 Story: 4 - Hank Aaron talks about his businesses and autobiography

Tape: 6 Story: 8 - Hank Aaron describes how he would like to be remembered