Jazz composer and vibraphonist Roy Ayers was born on September 10, 1940 in Los Angeles, California to Ruby Ayers and Roy Ayers, Sr. Ayers’ mother, a schoolteacher and piano instructor, began teaching him music when he was only a toddler. Growing up near Central Avenue, the heart of the West Coast jazz scene, Ayers was exposed to local luminaries from an early age. At five years old, Ayers was given his first set of vibraphone mallets by bandleader Lionel Hampton. Ayers attended Thomas Jefferson High School, where many of his classmates also went on to become famous jazz and R&B artists.

Ayers first played steel guitar and piano and did not study the vibraphone until meeting vibraphonist Bobby Hutcherson at age seventeen. At twenty-two, Ayers began his prolific recording career as a sideman for jazz saxophonist Curtis Amy. In 1963, Ayers released his first album, West Coast Vibes, and went on to record with the Jack Wilson Quartet, Chico Hamilton, and the Gerald Wilson Orchestra in the 1960s, before joining up with jazz flutist Herbie Mann at The Lighthouse club in Hermosa Beach, California. Mann produced three of Ayers’ albums for Atlantic Records, and Ayers was a principal soloist on Mann’s hit album Memphis Underground. In 1970, Ayers moved to Manhattan and formed Roy Ayers Ubiquity, marking his move into jazz fusion. Ubiquity released a number of records on Polydor Records, including hits like ‘We Live in Brooklyn’ and ‘Everybody Loves the Sunshine.’ As the decade closed, Ayers went solo with songs like Let’s Do It. In 1980, Ayers began collaborating with Nigerian musician Fela Kuti and formed Uno Melodic Records. Ayers considered In The Dark, released on Columbia Records in 1984, as one of his best recordings.

He continued releasing yearly albums through the 1990s. At the same time, Ayers’ work was remixed, covered, and sampled by the emerging hip hop generation that included such artists as Mos Def, Puff Daddy, and Mary J. Blige. In 1993, Ayers appeared on Gang Starr rapper Guru’s Jazzmatazz, Vol. 1, one of the first albums to combine a live jazz band with hip hop production. Singer Erykah Badu has dubbed Ayers the Godfather of Neo-Soul.

Roy Ayers was interviewed by The HistoryMakers on September 19, 2016. 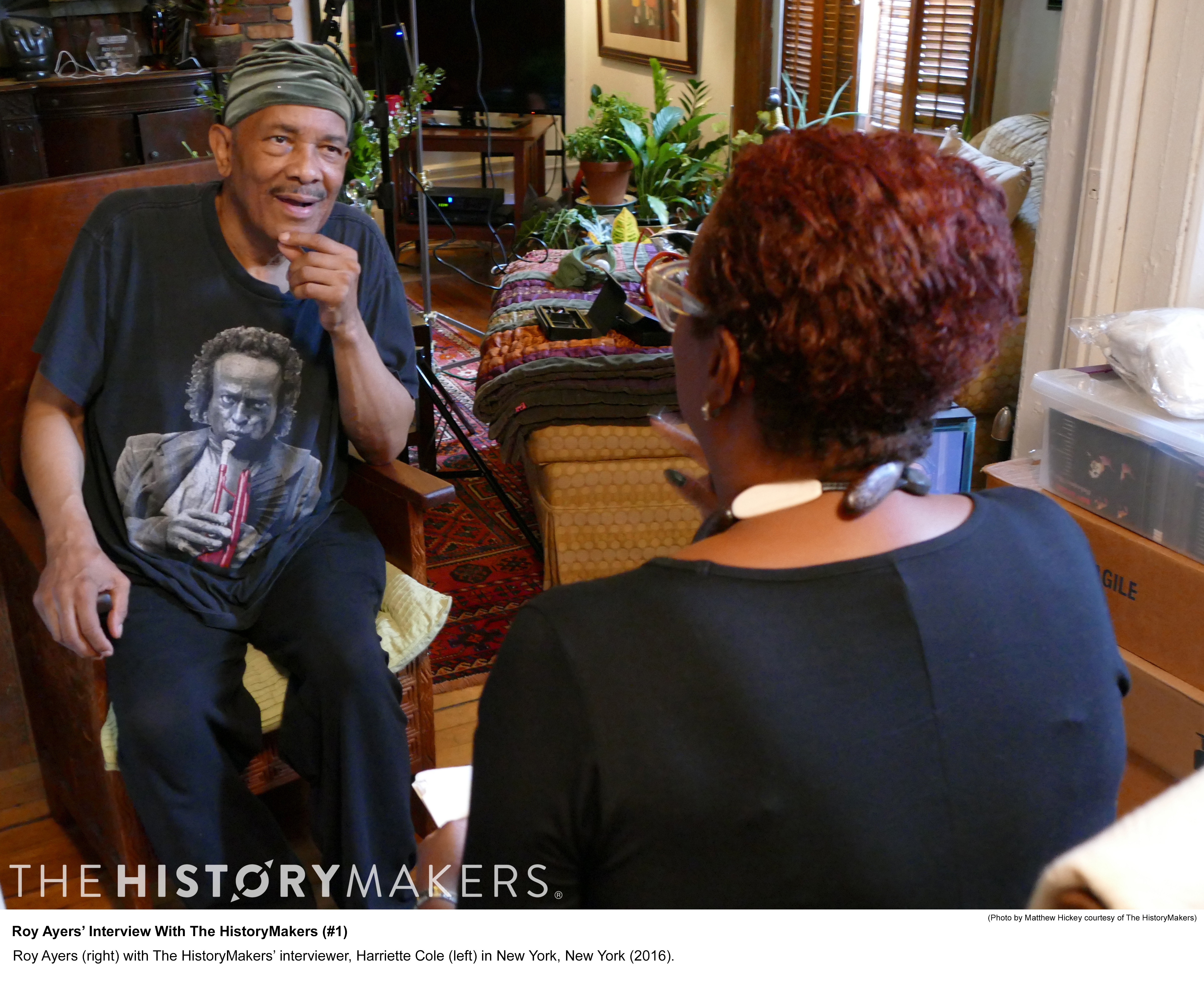 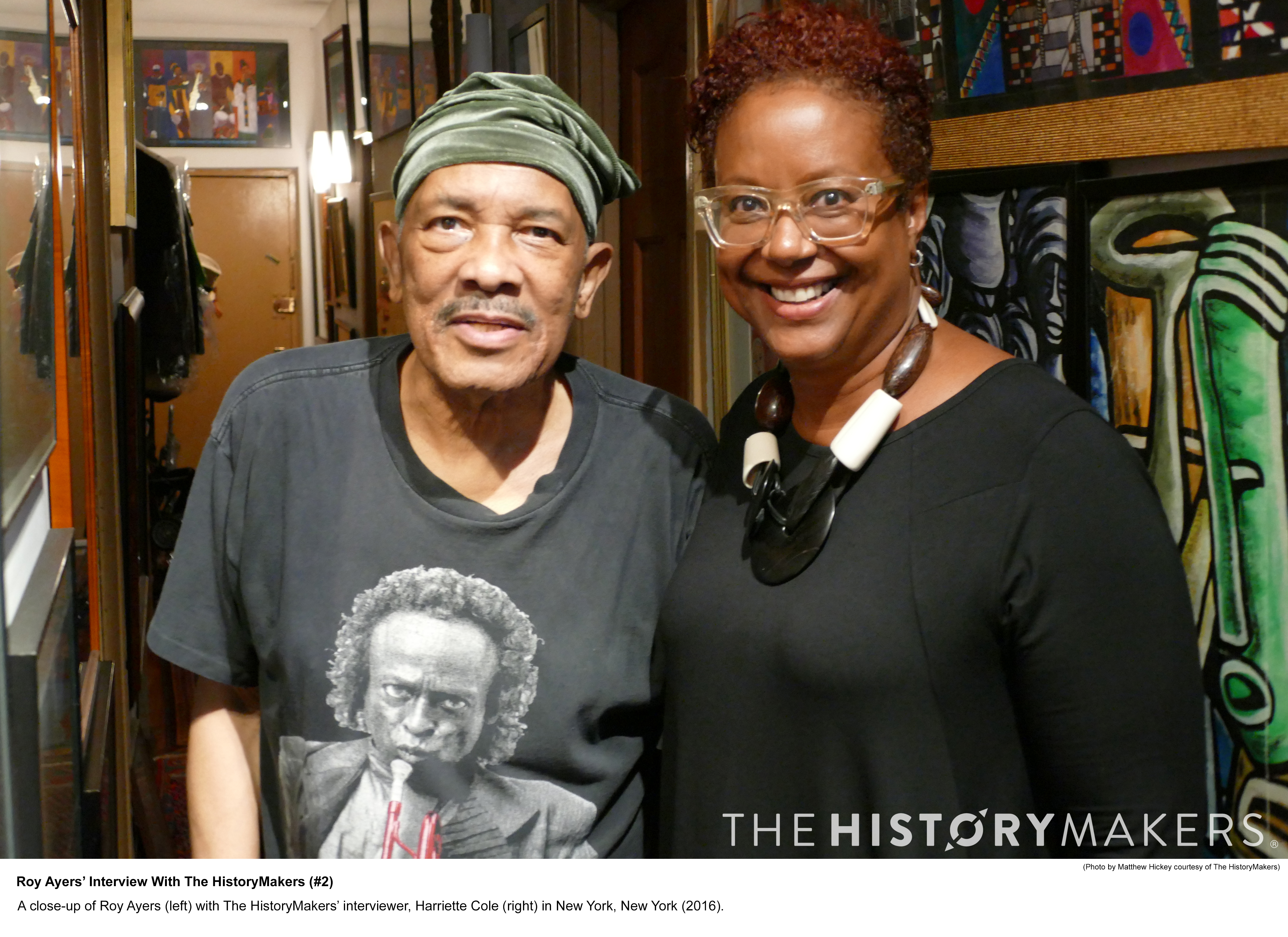 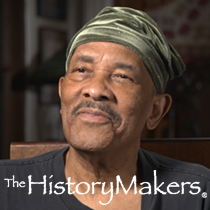 Jazz composer and vibraphonist Roy Ayers (1940 - ), a prolific jazz musician with more sampled hits than any other artist, was dubbed the “Godfather of Neo-Soul” in the 1990s.

Tape: 1 Story: 7 - Roy Ayers describes the sights, sounds and smells of his childhood

Tape: 2 Story: 9 - Roy Ayers describes talks about the popularity of his music among hip hop artists

Tape: 2 Story: 12 - Roy Ayers talks about his inspiration for 'Everybody Loves the Sunshine'

Tape: 3 Story: 2 - Roy Ayers talks about the sampling of his music

Tape: 3 Story: 4 - Roy Ayers describes the musical style of his album, 'In the Dark'

Tape: 3 Story: 8 - Roy Ayers talks about the political messages of his music

Tape: 3 Story: 12 - Roy Ayers describes his plans for the future

Tape: 3 Story: 13 - Roy Ayers reflects upon his life and legacy

DATitle
Roy Ayers talks about recording his first solo album, 'West Coast Vibes'
Roy Ayers talks about the hit song 'We Live in Brooklyn Baby'
Transcript
And then it came time, shortly thereafter, 1963 you were twenty-three years old and you recorded your first album that was yours, 'West Coast Vibes.'$$Right. Exactly.$$Tell me about 'West Coast Vibes.'$$Leonard Feather, I was performing with Vi Redd, Vi Redd, a saxophonist of an older, older generation. She was my sister's age, around that, and, my oldest sister [Thomasina Ayers] and she asked me to be on an album with a lot of West Coast musicians. And, I said, "I'd be happy to." And, I, I came on the album and it was really wonderful and rather than the person that did the production was Leonard Feather. He's the writer of the, of the, he's the writer of the Encyclopedia of Jazz, Volume One, Two, and Three ['Leonard Feather's Encyclopedia of Jazz.' Leonard Feather]. And, he said, "Roy [HistoryMaker Roy Ayers], have you ever recorded an album before?" And, I said, "No, I haven't. I have not. I'm not ready." He said, "Yes, you are." (Laughter) I was blown away. I said, "Wow." He said, "Yes." You know. He's a white guy but really a great guy, really a great guy. And, he said, "Yes, you are." And, he took me into the studio, and that's my first album, that 'West Coast Vibes,' there (simultaneous).$$(Simultaneous) Yep.$(Simultaneous) And then you also made another huge hit which is 'We Live in Brooklyn.'$$Right. 'We Live in Brooklyn,' Harry Whitaker wrote it, right, right, right. Harry Whitaker wrote, wrote that song.$$That has become iconic, for sure. Well (simultaneous)--$$(Simultaneous) Sure, with rappers too, right.$$But, at the time, you know before we get to the, the more recent times, but at the time when you, when you recorded that, what was going on in the world that made this anchor in Brooklyn [New York] so important.$$Well, we, I guess, 'We Live in Brooklyn Baby' because the song, the song made sense when my piano player, Harry Whitaker, he died too. Doggone, so many great guys that pass on, you know. But, Harry Whitaker said, "Roy [HistoryMaker Roy Ayers], you should do this song." And, when Ron Carter was playing the bass finger, Ron could not get the bass finger together. He did get it together but he could not get it together. And, so, Harry Whitaker is so funny he said, "We got 'em," (laughter). It was so funny because Ron Carter is such a genius of a bass player and he plays everything. He could play anything. He couldn't play it (scatting). It was very difficult for him to play that (scatting). Oh, my god. And, so, Harry said, "We got 'em," (laughter). That fool's so crazy. I couldn't believe it. I was, I was crazy because I was laughing. I said, "Oh, you crazy man, you're crazy." He said, I said, "You gotta be going crazy." He said, "Yeah," (Laughter). Anyway, but that was, that was interesting because he said, "We got, we got Ron Carter," (laughter).
Subscribe to Vibraphonist