The Black Academy of Arts and Letters

That summer at the Society for Ethical Culture’s Encampment for Citizenship, Cicely Tyson referred Van Scott to actress Vinette Carroll, who mentored Van Scott in theatrical arts. Soon Van Scott was moving easily between modeling for the Wilhelmina Agency and performing; a principal dancer with the Katherine Dunham, Agnes DeMille, and Talley Beatty dance companies, she also joined the American Ballet Company. Van Scott appeared on Broadway in House of Flowers, with Pearl Bailey in 1954; Kwamina in 1961; The Great White Hope in 1968; Billy No-Name in 1970; and Rhythms of the Saints in 2003. Van Scott played the Rolls Royce Lady in 1974’s film, The Wiz.

Let's go get some grub. 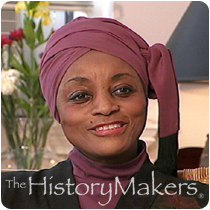 Dancer, theater professor, and stage actress Glory Van Scott (1947 - ) has acted in several plays and movies, and has written eight musicals. She has worked on many tributes to Katherine Dunham, and was awarded the first Katherine Dunham Legacy Award in 2002. She is also founded of Dr. Glory's Children's Theater.

Tape: 1 Story: 3 - Glory Van Scott remembers the origins of her interest in the Dunham Technique of dance

Tape: 4 Story: 10 - Glory Van Scott recalls her orientation toward religion as a child

Tape: 6 Story: 4 - Glory Van Scott remembers appearing as a principal dancer in 'Porgy and Bess' and as the Rolls Royce Lady in 'The Wiz'

Tape: 6 Story: 5 - Glory Van Scott remembers the dangers of being in the public eye

Tape: 7 Story: 9 - Glory Van Scott describes how she would like to be remembered