Writer Ishmael Reed was born on February 22, 1938 in Chattanooga, Tennessee to Thelma Virginia Coleman, a homemaker and salesclerk, and Henry Lenoir, a fundraiser for the YMCA. In 1942, he moved to Buffalo, New York with his mother and stepfather, Bennie Stephen Reed, an autoworker. Reed graduated from East High School in 1956, enrolled in night classes at Millard Fillmore College, and later transferred to SUNY Buffalo.

In 1961, Reed began writing for Empire State Weekly, during which time he interviewed Malcolm X for a community radio program. Reed then moved to New York City in 1962, where he joined the Umbra poets. In 1967, Reed began teaching at the University of California, Berkeley and published his first novel, The Free Lance Pallbearers. In 1969, Reed accepted a teaching position at the University of Washington, Seattle, where he taught for three years. Reed’s popularity soared in the 1970s with the publishing of several other books, including his novels Mumbo Jumbo and Flight to Canada. In addition to the popularity of his own work, Reed championed the work of other writers, operating various small presses and literary journals, including Yardbird, which he co-founded with poet Al Young in 1971, and Reed, Cannon & Johnson Publishing Company, which he co-founded in 1972. In 1976, he also co-founded the Before Columbus Foundation, which promoted contemporary American multicultural literature. Reed became a professor at Yale University and SUNY Buffalo in 1979. From 1983 until 1987, Reed was a professor at Columbia University before accepting a teaching position at Harvard University in 1987. Also, Reed authored over thirty published books, including The Complete Muhammad Ali , Juice! , Airing Dirty Laundry , A Secretary to the Spirits , and catechism of d neoamerican hoodoo church .

Reed has been the recipient of many awards and honors, including a 1998 MacArthur Genius Grant, The Guggenheim Memorial Foundation Award for fiction, a National Endowment fellowship for creative writing, and a National Institute of Arts and Letters Award for best noncommercial novel of 1974. Reed has also been nominated for a Pulitzer and two National Book Awards.

Reed and his wife, Carla Blank, live in Oakland, California. They have one daughter, Tennessee Reed. Reed has one other daughter, Timothy Bret Reed, from a previous marriage.

Ishmael Reed was interviewed by The HistoryMakers on December 13, 2015. 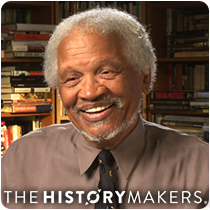 Fiction writer Ishmael Reed (1938 - ) authored a total of thirty novels, poetry collections, and plays, is a literary icon, and was a recipient of the MacArthur Genius Grant.