Music manager Troy Carter was born on November 14, 1972 in Philadelphia, Pennsylvania. He was raised in West Philadelphia, where he attended Huey Elementary and Sayre Middle School. In 1990, at the age of seventeen, Carter dropped out of West Philadelphia High School in pursuit of a career in the music industry.

Carter first worked for Will Smith and James Lassiter’s Overbrook Entertainment. He then joined Bad Boy Entertainment in 1995, where he worked with musical artists such as Notorious B.I.G. In 1999, Carter met and began to manage rapper Eve Jeffers. He subsequently co-founded his own management company called Erving Wonder, where he managed rap acts like Floetry and Nelly. In 2004, Erving Wonder was acquired by the Sanctuary Group.

In 2007, Carter was asked to manage Lady Gaga. That same year, he founded Coalition Media Group. In 2010, he established Coalition Media Group’s management division Atom Factory, where he serves as chairman and chief executive officer. Since then, Carter has managed the careers of numerous recording artists such as John Legend, Greyson Chance, Mindless Behavior, Priyanka Chopra, Lindsey Stirling, the Ceremonies, and John Mayer.

In 2011, he co-founded The Backplane, a Silicon Valley-based startup branding company. In 2012, he created A \ IDEA, a product development and branding agency, as well as AF Square, an angel fund and technology consultancy with investments in over sixty startup companies including Spotify, Warby Parker, Songza, Dropbox, Fab, and Uber. In addition, Carter has established a beverage company called POPwater.

Carter has served as an Aspen Institute Henry Crown Fellow and sits on the boards of The Grammy Foundation, the T.J. Martell Foundation, the United Nations Foundation Global Entrepreneurs Council and The Buckley School.

Troy Carter was interviewed by The HistoryMakers on August 9, 2014.

You Can’t Fall Off The Floor. 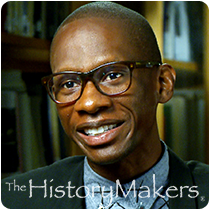 Tape: 1 Story: 6 - Troy Carter talks about his father's research into his family lineage

Tape: 1 Story: 11 - Troy Carter describes the sights, sounds and smells of his childhood

Tape: 2 Story: 2 - Troy Carter recalls his challenges during his youth

Tape: 2 Story: 6 - Troy Carter remembers getting into trouble as a teenager

Tape: 2 Story: 7 - Troy Carter recalls his mother's efforts to reform him and his brothers

Tape: 2 Story: 9 - Troy Carter talks about working with Will Smith and James Lassiter

Tape: 3 Story: 6 - Troy Carter talks about his experiences as a concert organizer in Philadelphia, Pennsylvania

Tape: 4 Story: 4 - Troy Carter talks about his professional setbacks in the mid-2000s

Tape: 6 Story: 4 - Troy Carter talks about the importance of mentorship

Tape: 6 Story: 7 - Troy Carter reflects upon the legacy of his generation