American Federation of Musicians of the United States and Canada

Jazz musician William “Buddy” Collette was born on August 6, 1921 in Los Angeles, California to Willie Hugh and Goldie Marie Collette. Collette cultivated his love for music at a young age, taking up the alto-saxophone and forming his first group at age twelve. This group included Britt Woodman on the trombone and Charles Mingus on the bass. By age seventeen, Collette was performing professionally and soon thereafter, he served in the U.S. Navy as a bandleader during World War II.

After returning from the war, Collette began playing with the Stars of Swing, a jazz quartet featuring saxophonist Dexter Gordon, bassist Charles Mingus, and drummer Chico Hamilton. The group helped to keep bebop music alive in Los Angeles during the mid-1940s in the historic Center Avenue neighborhood. In 1949, Collette performed around Los Angeles with a variety of jazz musicians including Edgar Hayes, Louis Jordan, Benny Carter, and Gerald Wilson. By 1950, Collette was working as a studio musician, and became the first African American musician to perform on television on the Groucho Marx show You Bet Your Life. In 1954, Collette worked as a disc jockey under the pseudonym of Sleepy Stein and released an album entitled Tanganyika, with a group consisting of Collette, drummer Chico Hamilton, trumpeter John Anderson, pianist Gerald Wiggins, guitarist Jimmy Hall, and bassist Curtis Counce. In 1955, Collette gained national recognition after he became a founding member of Chico Hamilton’s legendary quintet. In 1956, Collette recorded his first album, Man of Many Parts, as a bandleader. Later that year, Collette followed his debut album with Nice Day with Buddy Collette, which led to a string of albums throughout 1958 and 1959 including Calm Cool and Collette, Porgy and Bess, and Jazz Loves Paris.

In 1988, Collette recorded Flute Talk, his first album as a bandleader since 1964. Collette also produced a spoken word record on his experiences with jazz in 1994, Jazz for Thousand Oaks in 1996, and Live from the Nation’s Capital in 2000.

It Is Better To Be A Part Of Something Than Be All Of Nothing. 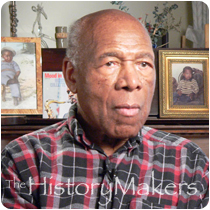 'You Bet Your Life'

Tape: 6 Story: 4 - William "Buddy" Collette recalls his election to the American Federation of Musicians Local 47 board