United States District Judge Vanessa Gilmore was born in October of 1956 in St. Albans, New York. In 1977, Gilmore received her B.A. degree in textiles and marketing from Hampton University, and in 1981, she earned her J.D. degree from the University of Houston Law Center.

Upon graduation, Gilmore began a thirteen-year career at the Houston law firm of Vickery, Kilbride, Gilmore & Vickery, where she specialized in civil litigation. In 1984, she was also hired as an adjunct professor at the University of Houston College of Law. Under Texas Governor Ann Richards, Gilmore became the first African American to be appointed to the Texas Department of Commerce Policy Board. She served as chairperson of that board until 1994, when President Bill Clinton appointed her as a federal judge on the United States District Court for the Southern District of Texas. At the time, Gilmore was the youngest sitting federal judge in the United States. In 2005, she presided over the high-profile Enron Broadband trial.

In 2008, Gilmore published her first book, A Boy Named Rocky: A Coloring Book for the Children of Incarcerated Parents, and has become a frequent speaker on issues related to these children and their families. In 2010, she released You Can’t Make This Up: Tales from a Judicial Diva, a humorous look at her life on and off the bench. Her next book, a fiction novel entitled Saving The Dream, was published in 2012. In 2014, she released Lynn’s Angels: The True Story of E. Lynn Harris and the Women Who Loved Him.

Gilmore is a sought after lecturer and speaker and has published noteworthy opinions on patients’ rights, the first amendment and copyright and patent law. She has served on the boards and advisory boards of a number of charitable organizations including the Houston Zoo, San Jacinto Girl Scouts, Spaulding for Children and Habitat for Humanity. Gilmore also serves on the board of trustees for Hampton University and on the board of Inprint, a literary arts organization. She is the recipient of numerous civic awards for community service and is a member of the Links, Inc. and Jack & Jill of America, Houston Chapter.

Gilmore lives in Houston, Texas with her son.

Vanessa Gilmore was interviewed byThe HistoryMakers on May 6, 2014.

Judge Gilmore would like to address audiences about incarcerated parents, adoption, legal issues, or pursuing a judicial career. 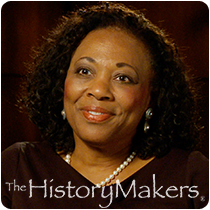 Federal district court judge The Honorable Vanessa D. Gilmore (1956 - ) was appointed to serve as a federal judge on the United States District Court for the Southern District of Texas in 1994, becoming the youngest federal judge in the United States at the time. She was the author of four books: A Boy Named Rocky: A Coloring Book for the Children of Incarcerated Parents; You Can’t Make This Up: Tales from a Judicial Diva; Saving The Dream; and Lynn’s Angels: The True Story of E. Lynn Harris and the Women Who Loved Him.

University of Houston College of Law

United States District Court for the Southern District of Texas

Subscribe to Jack and Jill of America, Houston Chapter