Publishing executive Earl "Butch" Graves, Jr. was born on January 5, 1962, in Brooklyn, New York to Barbara and Earl Graves, Sr., founder of Black Enterprise magazine. Graves graduated from Scarsdale High School in 1980. He went on to attend Yale University, where he was captain of the basketball team and became the school’s all-time leading scorer and the second leading scorer in Ivy League history. In 1984, Graves graduated from Yale University with his B.A. degree in economics, and was drafted into the National Basketball Association in the third round by the Philadelphia 76ers.

After a brief professional career in the NBA, where he played for the Milwaukee Bucks and Cleveland Cavaliers, Graves enrolled in Harvard Business School and graduated in 1988 with his M.B.A degree. Upon graduation, Graves joined Black Enterprise as Vice President of Advertising and Marketing. In 1991, he was promoted to Senior Vice President of Advertising and Marketing, and was named Executive Vice President and Chief Operating Officer in 1995. In 1998, Graves was appointed President and Chief Operating Officer of Black Enterprise and, in January of 2006, was named President and Chief Executive Officer, where he is responsible for the strategic positioning and overall profitability of the corporation, which includes magazine publishing, television production, digital media, and business and lifestyle events.

In 2000, Graves co-founded the Black Enterprise/Greenwich Street Corporate Growth Fund. He also serves as a managing director of the Pinnacle Minority Supplier Development Fund. Graves serves on the board of directors of AutoZone, Bermuda Tourism Authority, and is a trustee for The Committee For Economic Development. In addition to serving on numerous non-profit boards, Graves is a national advocate for the importance of education and athletics, and has served as an AAU (Amateur Athletic Union) Head Basketball Coach for more than ten years.

In 2002, Graves was inducted into the American Advertising Federation (AAF) Hall of Achievement; and in 2009, he was honored with the NCAA Silver Anniversary Award. He was also awarded the Jack Avrett Volunteer Spirit Award from the Boy Scouts of America in 2006.

Earl Graves, Jr. was interviewed by The HistoryMakers on February 21, 2014. 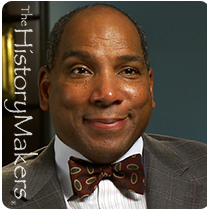