African Festival of the Arts

In 1989, Morris was appointed by Mayor Richard M. Daley as an event coordinator for the City of Chicago and as head producer for the Chicago Gospel Music Festival. Morris also created and coordinated Mayor Daley's annual Dr. Martin Luther King Jr. Interfaith Breakfast. She went on to serve as interfaith liaison for the United States House of Representatives in the Second District of Illinois.

In 2000, Morris was hired as a radio personality at WVON-AM in Chicago, where she went on to host "Gospel with Pam Morris." She worked at WWHN 1510-AM and WGCI-AM; and, for seven years, hosted the radio program entitled "The Inspirational Gospel Stroll," on WVAZ-FM. Morris also hosted "Gospel with Pam Morris" on cable television. In addition, she has worked as an international Gospel consultant for The Umbria Jazz Festival in Perugia, Italy; The Gospel and Soul Easter Festival in Terni, Italy; and The Tree of Life Gospel Event in Durbin, South Africa. She served as a consultant to the New Orleans Jazz & Heritage Festival, and was appointed lead ambassador for the American Heart Association’s Most Powerful Voices Gospel Tour. In 2009, Morris retired as event coordinator for the City of Chicago and founded the nonprofit organization P. Morris & Associates.

Morris has received numerous awards for her work. She was the 2006 Stellar Award recipient for Gospel Radio announcer of the year. She also received the 2010 Who's Who in Black Chicago Award; the 2010 Living Faith Church Lifetime Achievement Legacy Award; the City of Chicago Appreciation Award; the 2012 National Council of Negro Women Media Award; and N'Digo's N'Religion Award. Morris also served on the Grammy Board of Governors of the National Academy of Recording Arts & Sciences - Chicago Chapter.

Morris has recorded two Gospel albums, and is the author of the book Lessons Learned from Aunt Mabel and So Much More.

Pam Morris was interviewed by The HistoryMakers on January 23, 2014. 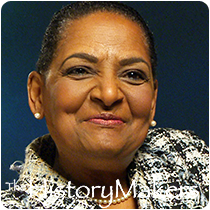 Radio host Pam Morris (1949 - ) , founder of P. Morris & Associates, is the host of WVON-AM’s "Gospel with Pam Morris," and was head producer for the Chicago Gospel Music Festival for over twenty years. She is the author of the book Lessons Learned from Aunt Mabel and So Much More.

Tape: 2 Story: 3 - Pam Morris recalls the music and television of her childhood

Tape: 2 Story: 10 - Pam Morris describes the magazines she read while growing up

Tape: 2 Story: 12 - Pam Morris talks about being raised in a strict household

Tape: 3 Story: 4 - Pam Morris talks about attempting to reconnect with her mother

Tape: 3 Story: 5 - Pam Morris describes the importance of prayer in her life

Tape: 3 Story: 8 - Pam Morris talks about being a minister's wife and recording an album with her husband

Tape: 3 Story: 9 - Pam Morris talks about her church and radio activities in Chicago, Illinois in 1975

Tape: 4 Story: 5 - Pam Morris describes how she selected music for the programs she hosted

Tape: 5 Story: 5 - Pam Morris talks about the role of prayer in her life

Tape: 5 Story: 6 - Pam Morris comments on the political and civic involvement of ministers in Chicago, Illinois

Tape: 6 Story: 5 - Pam Morris talks about her current relationship with her mother

Tape: 6 Story: 11 - Pam Morris describes how she would like to be remembered