In the mid-1970s when Harris was public address announcer for Howard University’s athletic teams, he was discovered by black radio entrepreneur, Dewey Hughes. Harris began hosting the popular Let’s Talk Sports on Howard’s WHUR-FM in 1979 and went on to become Sports Director for the station. Harris has hosted Community News and Sports on Channel 4 and provided sports commentary for FOX WTTG-TV. Anchoring the only live nightly sports call-in show in the Washington, D.C. Metropolitan area, NEWSCHANNEL 8’s Sports Talk, Harris earned back-to-back awards for “Best Year-Round Sports Coverage” from Virginia’s Associated Press. His feature “Anacostia at the Crossroads” garnered an award from the National Association of Black Journalists in 1995.

Harris was interviewed by The HistoryMakers on February 6, 2007. 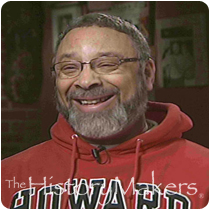 Tape: 2 Story: 9 - Glenn Harris describes the music of his childhood

Tape: 4 Story: 10 - Glenn Harris talks about the Division One baseball teams in 1970

Tape: 4 Story: 11 - Glenn Harris talks about the importance of choosing the right major

Tape: 5 Story: 2 - Glenn Harris remembers the comedians of his childhood

Tape: 6 Story: 4 - Glenn Harris talks about his abstinence from alcohol

Tape: 8 Story: 4 - Glenn Harris talks about his position in the community of Washington, D.C.

Tape: 8 Story: 7 - Glenn Harris describes how he would like to be remembered