In 1980, Hill was recruited as an instructor in the Department of Orthopaedic Surgery at the Northwestern University Feinberg School of Medicine. Between 1982 and 1994, he was promoted through the faculty ranks at the Feinberg School of Medicine. He was later appointed as a full professor of orthopaedic surgery in 1994. During his tenure at Northwestern University, Hill served on several university committees, including as a member of the Admissions Committee from 1982 to 1989; chair of the Motion Analysis Laboratory Implementation Committee from 1982 to 1984; co-director of the Center for Sports Medicine in 1982; and a member of the Minority Affairs Advisory Committee in 1989. Hill also served as a Major in the U.S. Army Reserves in 1985. He has provided medical care for both amateur and professional athletes and was the physician for the United States Olympic Team in Seoul, Korea in 1988. Later, Hill served as an attending physician at Northwestern Memorial Hospital, at Cook County Hospital, Children’s Memorial Hospital and the Rehabilitation Institute of Chicago. During his tenure at Northwestern Memorial Hospital, Hill served on the Nominating Committee; as chair of the Medical Executive Committee in 2006; and as the hospital’s chief of staff from 2006 to 2008.

Hill has made hundreds of professional presentations and published papers in more than fifty-five medical journals, including Journal of Back and Musculoskeletal Rehabilitation and Journal of Bone and Joint Surgery. He has received numerous awards, including being honored in 2006 by Health for Humanity for leadership in improving cultural competency within the medical profession and global health. Hill was inducted in the inaugural class of the Northwestern University Black Alumni Association Hall of Fame (2007). He also received the Icon Award from the Dr. Martin Luther King, Jr. Boys and Girls Club of Chicago (2008), and was honored by The Monarch Awards Foundation of Alpha Kappa Alpha Sorority, Inc.’s Xi Nu Omega Chapter (2009).

Hill and his wife, Sandra Hill, have three children and one grandchild.

Dr. James A. Hill was interviewed by The HistoryMakers on August 20, 2013.

Be Still And Know That I Am God. 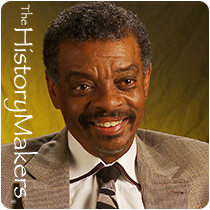 Orthopedic surgeon Dr. James Hill (1949 - ) served as a professor in the Department of Orthopaedic Surgery at the Northwestern University Feinberg School of Medicine, and as the chief of staff for Northwestern Memorial Hospital from 2006 to 2008.

Tape: 2 Story: 2 - Dr. James Hill describes the house his grandfather built on land he purchased in the 1930s in Bolton, Mississippi

Tape: 2 Story: 7 - Dr. James Hill talks about growing up on the West Side of Chicago, Illinois

Tape: 2 Story: 8 - Dr. James Hill describes the difference between the South Side and West Side of Chicago, Illinois

Tape: 3 Story: 7 - Dr. James Hill recalls the sights, sounds and smells of his childhood on the West Side of Chicago, Illinois

Tape: 3 Story: 10 - Dr. James Hill recalls a story about getting his brothers into trouble, pt. 1

Tape: 3 Story: 11 - Dr. James Hill recalls a story about getting his brothers into trouble, pt. 2

Tape: 4 Story: 6 - Dr. James Hill talks about black physicians who inspired him in his adolescence

Tape: 4 Story: 11 - Dr. James Hill describes his acceptance to Northwestern University in Evanston, Illinois and his experience in the biology department

Tape: 5 Story: 3 - Dr. James Hill talks about working at the post office and renting an apartment in Juneway Terrace in Chicago, Illinois

Tape: 6 Story: 9 - Dr. James Hill talks about his participation in the credentials committee and the oversight committee at Northwestern Memorial Hospital and Feinberg School of Medicine

Tape: 6 Story: 11 - Dr. James Hill talks about his duties as attending physician in orthopaedic surgery and about papers he has published

Tape: 7 Story: 1 - Dr. James Hill lists the states in which he is licensed to practice medicine

Tape: 7 Story: 3 - Dr. James Hill describes an article he wrote about healthcare in warzones while living in Ethiopia in the 1980s

Tape: 7 Story: 9 - Dr. James Hill talks about his mentor's family and his own family-planning

Tape: 7 Story: 10 - Dr. James Hill talks about his children and lessons he learned from his family