Legal scholar and law professor Randall LeRoy Kennedy was born on September 10, 1954 in Columbia, South Carolina as the middle child of Henry Kennedy Sr., a postal worker, and Rachel Kennedy, an elementary school teacher. Kennedy has two siblings: Henry H. Kennedy, Jr., a former United States District Court Judge for the District of Columbia; and, Angela Kennedy, a lawyer in the District of Columbia Public Defender Service. Kennedy’s father often spoke of watching Thurgood Marshall argue Rice vs. Elmore, the case that invalidated the rule permitting only whites to vote in South Carolina’s Democratic primary. His family moved from South Carolina to Washington, D.C. where Kennedy graduated from St. Albans School in Washington, D.C. and then enrolled at Princeton University where he received his A.B. degree in 1977. In 1979, he became a Rhodes Scholar in the Balliol College at the University of Oxford. Kennedy went on to earn his J.D. degree in 1982 from Yale Law School.

Upon graduation, Kennedy was awarded an Earl Warren Civil Rights Training Scholarship for African American Law Students. He served as a law clerk for Judge J. Skelly Wright of the United States Court of Appeals for the District of Columbia Circuit from 1982 to 1983 and for Justice Thurgood Marshall of the United States Supreme Court from 1983 to 1984. Kennedy was admitted to the District of Columbia Bar in 1983. He was also admitted to the Bar of the United States Supreme Court. Kennedy is a member of the American Law Institute, the American Academy of Arts and Sciences, and the American Philosophical Association. In 1984, Kennedy joined the faculty at Harvard Law School as a full professor where he taught courses on legal contracts, freedom of expression, and the regulation of race relations.

Awarded the 1998 Robert F. Kennedy Book Award for Race, Crime, and the Law (1997), Kennedy has written for a wide range of scholarly and general interest publications. He has also served on the editorial boards of The Nation, Dissent, and The American Prospect. Kennedy is the author of Nigger: The Strange Career of a Troublesome Word (2002), Interracial Intimacies: Sex, Marriage, Identity and Adoption (2003), Sellout: The Politics of Racial Betrayal (2008), and The Persistence of the Color Line: Racial Politics and the Obama Presidency (2011). Kennedy was awarded an honorary degree from Haverford College and is a former trustee of Princeton University. He is also a Fellow of the American Academy of Arts and Sciences.

Randall LeRoy Kennedy was interviewed by The HistoryMakers on April 27, 2013.

For Us There Is Only The Trying, The Rest Is Not Our Business. - T. S. Eliot 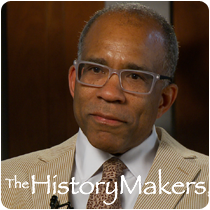 Law professor Randall Kennedy (1954 - ) , the Michael R. Kline Professor Law at Harvard Law School, was awarded an honorary Doctor of Laws degree by Haverford College. He was also a Fellow of the American Academy of Arts and Sciences.