A long time military officer, Major General Arthur Holmes, Jr. served almost four decades in the United States Army, retiring as a Commanding General. A highly distinguished officer, he won several awards and decorations such as the Legion of Merit, the Bronze Star Medal and the Distinguished Service Medal.

Holmes began his military career as a member of a Reserve Officers Training Corps (ROTC) program in college. In June 1952, upon graduation, he was commissioned as a Second Lieutenant in the U.S. Army. Filling a variety of roles, Holmes served twice as a Maintenance Battalion Commander, the second in Vietnam; a member of the Guidance and Procedures Branch of the Logistics Directorate for the Joint Chiefs of Staff; Chief of Ordnance Branch of the Officer Personnel Direc¬torate at the U.S Army Military Personnel Center before becoming Command¬er of the Division Support Command for the First Infantry Division (Mechanized) at Fort Riley, Kansas; and subsequently served as Assistant Division Commander-Support for the same unit, the first Combat Service Support officer to fill the position. Holmes - then made history - becoming the first combat service support officer to serve as Executive Officer to the Secretary of the Army from 1977 until 1979. Holmes’ final post - before retiring in 1987 - was that of Commanding General, U.S. Army Tank-Automotive Command, where he oversaw the delivery of 30,000 tactical vehicles to the field with the highest level of user satisfaction yet achieved. On behalf of his service to the U.S. Army, in 1991, Holmes became am Inductee in the 1999 Ordnance Corps Hall of Fame.

Arthur Holmes, Jr. was born on May 12, 1931 in Decatur, Alabama. He earned his B.S. degree in chemistry from the Hampton Institute – now called Hampton University, and his M.B.A degree from Kent State (Ohio) University. Holmes is also a graduate of the Naval War College. Moving on from the military, he became highly involved in business and governmental life serving for eight years as Vice-President of Logistics Applications and then President and CEO of the Automated Sciences Group, Inc. - a high-tech corporation with 300 computer scientists and engineers and average annual revenue of $28 million. Holmes also served a seven year stint with the Montgomery County Planning Board, serving as a commissioner, and then vice-chair and chairman. Between 2002 and 2004, he served as Director of Go Montgomery! – a Department of Public Works and Transportation (DPWT) agency devoted to implementing the County’s Master Plan in all transportation regions. He took over the helm of DPWT, in October 2004.

Holmes is involved with many boards and organizations including Omega Psi Phi Fraternity. He and his wife, Wilma, have four children and six grandchildren, and they reside in Olney, Maryland.

Holmes was interviewed by The HistoryMakers on July 29, 2008. 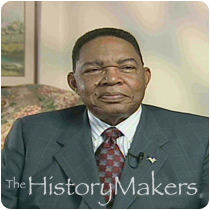 Major general Maj. Gen. Arthur Holmes, Jr. (1931 - ) retired from the military as Commanding General, U.S. Army Tank-Automotive Command, where he oversaw the delivery of 30,000 tactical vehicles to the field with the highest level of user satisfaction yet achieved. He also served as Director of Go Montgomery!, a Department of Public Works and Transportation in Alabama.

<a href="https://da.thehistorymakers.org/story/571071">Tape: 2 Maj. Gen. Arthur Holmes, Jr. remembers his professors and classmates at the Hampton Institute</a>

<a href="https://da.thehistorymakers.org/story/571088">Tape: 4 Maj. Gen. Arthur Holmes, Jr. recalls his appointment as the executive officer to secretary of the army</a>

<a href="https://da.thehistorymakers.org/story/571089">Tape: 4 Maj. Gen. Arthur Holmes, Jr. recalls his duties under the secretary of the army</a>

<a href="https://da.thehistorymakers.org/story/571101">Tape: 5 Maj. Gen. Arthur Holmes, Jr. talks about his directorship of the Montgomery County Department of Transportation</a>

<a href="https://da.thehistorymakers.org/story/571103">Tape: 5 Maj. Gen. Arthur Holmes, Jr. talks about his work at the Montgomery County Department of Transportation</a>

<a href="https://da.thehistorymakers.org/story/571107">Tape: 5 Maj. Gen. Arthur Holmes, Jr. describes how he would like to be remembered</a>