From 1979 until 1981, Long worked for the Ford Motor Company as a zone manager in parts and services. He then was hired at HoneyWell where he worked in the energy management division from 1981 until 1987. In 1986, Long received his M.A. degree in divinity from the Interdenominational Theological Center in Atlanta, Georgia, and in 1987, he became the senior pastor of the New Birth Missionary Baptist Church in Lithonia, Georgia. Since his installation, New Birth’s membership has multiplied to well over 30,000 members. In 2001, Long began serving as co-chair for the “Hosea Feed the Hungry” Project, and in 2004, he established a mentorship program known as the Longfellows Summer Academy in order to assist in the mental, physical and spiritual development of young men between the ages of twelve and sixteen. In 2006, Long earned his Ph.D. in pastoral ministry from the International College of Excellence in Tampa, Florida.

Long served as a member on several boards including the Morehouse School of Religion Board of Directors (Vice President); Board of Trustees for North Carolina Central University; Board of Trustees for Young Life; Board of Directors for Safehouse Outreach Ministries; and 100 Black Men Of America. Long authored numerous books, including I Don't Want Delilah, I Need You; Power of a Wise Woman; What a Man Wants, What a Woman Needs; Called to Conquer; Taking Over; It's Your Time!; Gladiator: The Strength of a Man; The Blessing in Giving and Deliver Me From Adam.

Bishop Eddie Lee Long was interviewed by The HistoryMakers on February 28, 2008. 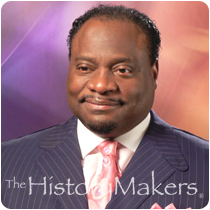 Pastor Bishop Eddie L. Long (1953 - 2017 ) was the senior pastor of the New Birth Missionary Baptist Church, in Lithonia, Georgia. He was co-chair for the Hosea Feed the Hungry Project, and in 2004, he established a mentorship program for boys known as the Longfellows Summer Academy.

<a href="https://da.thehistorymakers.org/story/482773">Tape: 1 Bishop Eddie L. Long remembers his relationship with his mother</a>

<a href="https://da.thehistorymakers.org/story/482776">Tape: 1 Bishop Eddie L. Long describes the sights, sounds and smells of his childhood</a>

<a href="https://da.thehistorymakers.org/story/482787">Tape: 2 Bishop Eddie L. Long recalls his aspirations to become a preacher</a>

<a href="https://da.thehistorymakers.org/story/482788">Tape: 3 Bishop Eddie L. Long describes his father's challenges as a minister</a>

DATitle
Bishop Eddie L. Long recalls his aspirations to become a preacher
Bishop Eddie L. Long talks about developing his confidence
Transcript
Your father [Floyd Long, Jr.] was a preacher. What church did he pastor, or did he preach at (simultaneous)?$$(Simultaneous) What church he didn't pastor. This is the history of my dad. My dad is a pastor. My dad would go start a church, a lot of times from scratch, build a new building. He'd grow the membership, get in the new building, and within six months, on just a normal Sunday, he'd get up, cuss the deacons out, and telling my mom [Hattie Alston Long], "Let's go." And he'd walk down the aisle and leave, and we followed behind him, and would never come back. He'd go start another church. So, he was a church builder. He could grow a church with members, and then he would always build a nice building. And it never failed; within six months he's going to get up, cuss the deacons out, and leave.$$Did you ever find out what the problem, what problem he was having with the deacons (simultaneous)?$$(Simultaneous) Well, as a--as a pastor myself, (laughter) it is very challenging at times to work. And he was always in a rural church. So in a rural church, the deacons generally always felt that they were supposed to run the church, and all the pastor was to do was to come and preach and do ceremonial things. But they controlled the pastor and everything else, and my dad just wasn't going for that. He would deal with it, and argue with them for a while, and after a while he'd get sick of them. I guess he was looking for a place where he would be the visionary, et cetera. But my dad was a tough man, too. He was a tough guy, I gotta, you know. So--$$So you spent your Sundays in church?$$Yeah, from the rising of the sun to the going down of the sun, all day.$$And what were your thoughts about church? Did you have any idea that you would become a preacher at that time?$$At one time, I really wanted to be a preacher. I used to be the little cute boy, and Mama would say, "He's going to be a preacher." And I'd be playing preacher. "Oh, look at him," you know. And then after a while, it's like I don't want nothing to do with this. I, I just didn't want it. I had seen what my daddy was going through and all that, and I wanted to be a businessman. That's the side of my daddy I caught. That's why I went to North Carolina Central University [Durham, North Carolina] and majored in business and marketing.$And why do you say you were shy?$$I was very shy. I was (simultaneous)--$$(Simultaneous) Really?$$Because I never, it took me a long time to grow out of secondhand clothes, and people always looking at me as a secondhand guy. I was a senior in high school [North Mecklenburg High School, Huntersville, North Carolina] before I got a pair of Converse. You either had Converse, or you had nothing. Converse was only ten dollars, and I, I couldn't afford them. And so if you had something from Kmart [Kmart Corporation] on, kids would make fun of you, you know. And so, you had to have some Chuck Taylor Converse. So, I always made myself second. I just--it was hard, and I never--because I didn't dress right, and I never thought a girl would want to talk to me. I was surprised when I went up to them. I just, I got my nerve up when I talked to my girlfriend in tenth or eleventh grade, and we got together. I didn't think she was going to pay me any attention. I just said, "I'm desperate now for a girlfriend (laughter)." But I just never--I had this thing in my head. Even now, my wife [Vanessa Griffin Long] pushes me, you know. I can deal with it. I was raised with three boys, wasn't no sisters. And the challenge me and my wife has, she was raised with--she's seven of seven girls, no boys. And I'm four boys, you know, and all of that. And so I said, "You don't know nothing about men." And she said, "You don't know nothing about women." I say but I'm very comfortable in ministering the men and addressing men. When it gets around to talking to women, I get nervous, you know. So, she pushed me to do the women thing--elect ladies. And it just, and I'm surprised that I have something to say. But it's more so a mental thing, that I'm still thinking I'm still in the secondhand clothes. I'm thinking I'm Cinderella after the carriage turned back to the pumpkin, you know. And so--pray I overcome.
Subscribe to Beulah Heights