Civic activist and elementary school teacher Hannah H. Thomas was born in Florence, Alabama on December 25, 1916. The eighth of ten children, she is the daughter of Evernee Hubbard and Everett N. Hawkins. Thomas graduated from Burrell High School in Florence, Alabama in 1939 and earned her B.S. degree in education from Alabama A & M University in 1951. She later earned her M.S. degree in education from the University of Cincinnati in 1964.

Thomas taught school for more than ten years in Alabama, and was given a Teacher of the Year award in 1956 before she moved to Cincinnati in 1958. She taught in the public schools in Cincinnati for twenty-two years. Although officially retired from teaching, she continues working as an educator. She also founded Cincinnati’s African American Heritage Day and the Sojourner Truth Drama Group.

Thomas has received many awards and honors, including her selection as one of 200 Greater Cincinnatians during the bicentennial in 1988, a Cincinnati Enquirer Woman of the Year Award in 1992, and the Zeta Phi Beta, the Beta Zeta Zeta Chapter, Woman of the Year Award in 1998. Thomas is also listed in America’s Registry of Outstanding Professionals and Who’s Who in the World. She passed away on January 22, 2014.

Hannah H. Thomas was interviewed by The HistoryMakers March 15, 2005.

You Can Be Anything You Want To Be. 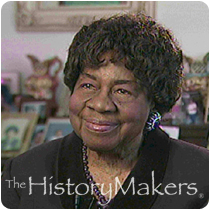 Laurderdale County Board of Education

Lincoln Heights Board of Education

Cincinnati Board of Education

Tape: 3 Story: 7 - Hannah H. Thomas describes problems with the No Child Left Behind Act of 2001