Computer scientist and computer science professor Andrea Lawrence was born in Asheville, North Carolina on October 6, 1946 to Jeanne Hayes and Emory Williams. Her family supported education and both of her parents finished college after she was born. Lawrence graduated from Allen High School in Ashville in 1964 and enrolled at Spelman College. She finished her undergraduate education at Purdue University earning her B.S. degree in mathematics in 1970. From 1979 to 1983, Lawrence taught mathematics in Cincinnati Public Schools before beginning her long career at Spelman College. She earned her M.S. degree in computer science from Atlanta University in 1985.

Having begun her career at Spelman as a lecturer and computer literacy coordinator, Lawrence was promoted to director of the computer science program in 1986. She held that position for three years before going back to school to pursue her doctorate. In 1993, Lawrence became the first African American to obtain her Ph.D. degree from the Georgia Institute of Technology in computer science. She then returned to Spelman as an assistant professor in computer science, and in 1994, she became chair of the computer and information sciences department. Lawrence was promoted to associate professor of computer science in 1995. Throughout her career, she has been instrumental in programs to increase the number of minorities and woman involved in scientific disciplines, serving as president of the Association of Departments of Computer Science/Engineering at Minority Institutions (ADMI) and associate director of the National Aeronautics and Space Administration (NASA) WISE (Women in Science and Engineering) Scholars at Spelman College. Lawrence teaches a range of computer science classes including programming languages, computer graphics, artificial intelligence, and human-computer interactions. She also supervises projects on remote sensing in Antarctica, which uses satellites or aircraft to gather information about Antarctic ice. In addition to her teaching, Lawrence has published numerous papers for her research on human-computer interaction, including using computer animations to teach algorithms.

Lawrence has received several awards to date including the National Technical Association’s Technical Achiever of the Year Award in 2004. She was also named a Technology All-Star in 2005 by the National Women of Color (NWOC). Lawrence lives in Atlanta, Georgia and has three grown children, Deirdre, a scientific consultant, Allegra, an attorney and Valerie, a student.

Andrea Lawrence was interviewed by The HistoryMakers on March 17, 2012.

Find a way or make one. 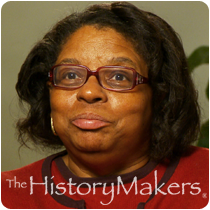 Tape: 1 Story: 6 - Andrea Lawrence talks about her mother's growing up in North Carolina and Georgia

Tape: 1 Story: 7 - Andrea Lawrence talks about her father and how her parents met

Tape: 1 Story: 8 - Andrea Lawrence talks about her early relationships with her parents and grandparents

Tape: 2 Story: 5 - Andrea Lawrence discusses her relationship with her father after her parents' separation

Tape: 2 Story: 6 - Andrea Lawrence talks about the influence of her elementary school teachers

Tape: 2 Story: 8 - Andrea Lawrence talks about traveling along with her father, uncle, and cousins

Tape: 3 Story: 7 - Andrea Lawrence describes how she met her husband

Tape: 4 Story: 2 - Andrea Lawrence talks about reactions to the assassination of Dr. King

Tape: 4 Story: 4 - Andrea Lawrence talks about Dr. Etta Faulkner and her decision to pursue a Ph.D.

Tape: 5 Story: 4 - Andrea Lawrence talks about her book and the psychology of computers

Tape: 5 Story: 9 - Andrea Lawrence reflects on her legacy and career

Tape: 6 Story: 1 - Andrea Lawrence reflects on her life and career

Computer scientist William Lupton was born on May 26, 1941, in Philadelphia, Pennsylvania. He attended Central High School, graduating in 1959. That same year, Lupton joined the United States Navy and became a sailor, eventually becoming a U.S. Naval Flight Officer and attained the rank of Commander. He logged over 5,000 flight hours in his career and earned five Strike/Flight air medals for his combat cruises to Vietnam. In 1972, Lupton attended the Naval Postgraduate School in California where he received his B.S. and M.S. degrees in computer science. In 1980, Lupton served as chairperson of the computer science department at the United States Naval Academy. While there, he designed one of the most innovative and complete computer science majors in the country.

Lupton has been president of the Baltimore and National chapters of the National Technical Association and is a member of the National Academy of Sciences. He was also the inaugural national president of the Association of the Departments of Computer Science and Engineering at Minority Institutions (ADMI). He has generated over $5 million in funding to improve science and science education.

Lupton is married to Monica McKinney and has three sons, Michael, Steven, and Scott Lupton.

William Lupton was interviewed by The HistoryMakers on July 13, 2010.

It Is Better To Have And Not Need Than To Need And Not Have. 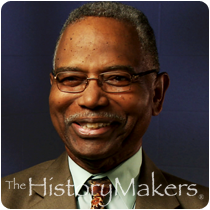 Tape: 1 Story: 4 - William Lupton discusses how far back he can trace his family background

Tape: 1 Story: 7 - William Lupton describes memories of growing up with his cousin

Tape: 1 Story: 10 - William Lupton reminisces about Christmas in his youth

Tape: 1 Story: 11 - William Lupton reflects upon his family's connection to the Navy

Tape: 2 Story: 5 - William Lupton recalls the sights, sounds and smells of his neighborhood in Philadelphia, Pennsylvania

Tape: 2 Story: 6 - William Lupton describes the type of student he was

Tape: 2 Story: 7 - William Lupton recalls an emergency visit to the doctor as a child

Tape: 2 Story: 8 - William Lupton explains how he developed a sense of critical thinking

Tape: 3 Story: 2 - William Lupton describes his interest in math, computer science and in track as a youth

Tape: 3 Story: 3 - William Lupton considers the role of religion in his life

Tape: 3 Story: 5 - William Lupton recalls his early United States Navy experiences and his plans to get an education

Tape: 3 Story: 6 - William Lupton discusses receiving an education through his career in the United States Navy

Tape: 3 Story: 8 - William Lupton describes his Naval career path from the USS Forrestal to serving in the Vietnam War

Tape: 4 Story: 1 - William Lupton describes the nature of his military activity as a pilot in the Vietnam War

Tape: 4 Story: 8 - William Lupton tells of another landing incident aboard the USS Nimitz

Tape: 5 Story: 1 - William Lupton explains what happened to his aircraft aboard the USS Nimitz

Tape: 5 Story: 3 - William Lupton shares some experiences from his service as a Professor of Naval Sciences

Tape: 5 Story: 6 - William Lupton describes his departure from Jackson State University and the reception of his Ph.D. degree

Tape: 5 Story: 7 - William Lupton discusses his arrival at Morgan State University and his development of the computer science department

Tape: 5 Story: 11 - William Lupton reflects on the progress being made in computer science

Tape: 6 Story: 3 - William Lupton describes the decisions his faculty are faced with in the Department of Computer Science at Morgan State University

Tape: 6 Story: 6 - William Lupton discusses the things he enjoys about his job in computer science

Tape: 6 Story: 7 - William Lupton describes the awards he has received

Tape: 6 Story: 10 - William Lupton explains why he would be a medical doctor if he was not doing computer science

DATitle
William Lupton recalls fixing his family's broken stereo
William Lupton recalls an emergency visit to the doctor as a child
Transcript
Did you like to challenge your father?$$Not so much as challenge, but to verify (laughter), to verify. I know when stereos first came out, my dad bought us a stereo. And, oh, we loved it. We used to play it all the time. In fact, my favorite artist back then was a singer named Dakota Staton. You probably--most people never even heard of Dakota Staton, but she, she was a jazz singer; loved her. One day, the stereo broke, and I said, oh, wow. And I asked Dad [Clement M. Lupton] to fix it. Dad didn't have any money to fix it. His position was, you shouldn't have broke it in the first place (laughter). So I said, okay. One day when I got just tired of waiting, I took the stereo apart. My brother came in, and he said, what are you doing? I said, I'm fixing the stereo. He said, you'd better get that back together before Dad gets (laughter). Okay, he's gonna kill you. So, sure enough I found the piece that was broken on it, and I didn't have any way to replace it so I glued it and glued it and put some scotch tape on it and put it back together. The thing worked. Dad came home. The stereo was working. He noticed the music, but he didn't ask how it got repaired. So I never told him (laughter).$So what would you say was your earliest encounter with science?$$My earliest encounter with science was kind of an accident. We had--I don't know what had happened. We were in the house and either the hot water heater wasn't working or it had broken down or something. Anyhow, we had no hot water. And it was bath time so I was boiling some water on the stove and I was gonna pour it in the bathtub. And I recall when the water was boiling, I got some mits and I lifted this pot up off the stove, and I was gonna take it into the bathroom. And my brother came behind me and bumped me and I spilled the whole pot of boiling water on my chest which as I recall felt like ice cold. And I put the pot down and I was calling my mother [Mary Katherine Thomas Lupton], oh, oh, look what he did. And I was concerned about spilling the water on the floor. And then I took my shirt to pull it up to show my mother how wet it was, and I looked down, and I had no skin (laughter) to about my waist because it had all boiled off. My mother grabbed me and took me out the house and around to this hospital which is on the other side of the wall there that was Girard College [Philadelphia, Pennsylvania]. And this doctor was putting this salve and stuff on me, and I'm looking, saying what is this he's doing? And he was explaining what he was doing 'cause I was, between tears I was trying to listen to find out what he was doing because I was always conscious of what was happening to me. And I made the connection and said, hum, this guy's a doctor and I see what the doctor is doing, putting this salve, it looked like salve on me. And that was supposed to have some kind of reaction with the skin and the blood and the stuff and then he wrapped it. And I got to thinking about that, and I thought well,--$$About how old were you then?$$Oh, I guess I was about ten [years old], maybe eleven, somewhere around there.
Subscribe to Computer Science Professor