Dancer Elaine Ellis (also known as Calamity Jane) was born November 30, 1917 in Panama. She moved to New York with her mother, Flossie Freeman McNeil, and father, Clifford McNeil, at the age of seven. As a young girl, Ellis learned to dance. She was instructed by friends who attended the Henry LeTang School of Dance. After graduating from Jamaica High School, Ellis taught touch typing and eventually became a traveling instructor. Interested in going into business for herself, Ellis owned and operated a dry cleaner and later a cosmetics counter in a local department store. Disenchanted with business ownership, Ellis answered an open call at the Cotton Club for Spanish girls, and although she only knew four Spanish words, was the last chorus girl hired in 1939.

When the Cotton Club closed in 1940, Ellis continued to perform at Café Zanzibar, Club Mimo, the Lenox Lounge, in Atlantic City and at the Apollo Theater. At the Apollo Theater, Ellis performed with Bill “Bojangles” Robinson, Duke Ellington, Don Redman, and Andy Kirk. A married mother of two, Ellis eventually quit dancing to begin a lucrative twenty-five year bartending career. Ellis tended bars all over Harlem and gained quite a following, winning awards for the most congenial and best bar maid.

In 1986, Ellis was invited by Geraldine Rhodes-Kennedy to join the Silver Belles. Ellis was honored to join a group of former chorus girls including Bertye Lou Wood, Fay Ray, Cleo Hayes, and Marian Coles. The Silver Belles performed at senior centers and regularly, at the Cotton Club. In 1986, the Silver Belles were featured in a documentary about their lives, "Been Rich All My Life" directed and produced by Heather Lyn MacDonald.

Elaine Ellis was interviewed by The HistoryMakers on October 25, 2007. 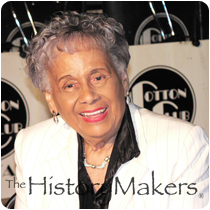 Dancer Elaine Ellis (1917 - 2013 ) was a member of the Silver Belles, a senior dance group of the former Harlem Chorus Girls. Ellis performed with Bill "Bojangles" Robinson, Duke Ellington, Don Redmond, and Andy Kirk during her career.

Tape: 1 Story: 9 - Elaine Ellis talks about her neighborhoods in Queens and the Bronx, New York

Tape: 1 Story: 12 - Elaine Ellis talks about her son and husband

Tape: 2 Story: 3 - Elaine Ellis recalls her experiences as a dancer at clubs in New York City

Community activist and union organizer John Alderman Matthews, Sr. was born on March 3, 1910 in the Panama Canal Zone to Theresa and Christopher Sylvester Matthews, a homemaker and a school teacher from Jamaica. One of seven siblings, Matthews grew up and attended high school in Kingston, Jamaica. After high school, Matthews moved to New York City, where over the years, he studied at New York University, the New School of Social Research, City Colleges of New York, and Bronx Community College.

Matthews began working in the field of civil rights in 1935 when he and four other workers formed the first picket line against the Transport Workers Union. At the same time, he became a founding member of the Harlem Labor Union, forcing the union to accept African American as bus drivers. In 1943, Matthews attended military school in New Jersey and served in the 92nd United States Infantry Division in Europe.

After returning from the war, Matthews went to work as a salesman, but continued his community activism. He founded a bartenders’ and restaurant workers’ union that broke open employment barriers in Harlem and the rest of New York City in the mid-1950s. In 1963, he worked as a campaign secretary to U.S. Congressman Adam Clayton Powell. In the mid-1960s, Matthews spearheaded efforts that ended discriminatory hiring or membership practices by Bond Clothing Stores, Bronx State Hospital, Park Sheraton Hotel, Borden’s, Columbia University College of Physicians and Surgeons and the United Brotherhood of Carpenters. This work culminated in Matthews, who had earlier become the first Vice President of the New York Chapter of the NAACP, being named chairman of the NAACP Labor and Industry Department in 1967.

Matthews was interviewed by The HistoryMakers on December 17, 2006. 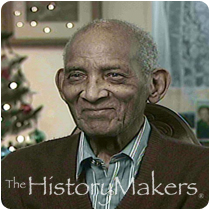 Salesman and community activist John Matthews (1910 - 2013 ) was the co-coordinator of the first picket line against the Transport Workers Union and became a founding member of the Harlem Labor Union. Matthews also founded a restaurant workers’ union that broke open employment barriers in Harlem, New York, and was named chairman of the NAACP Labor and Industry department.

Tape: 1 Story: 9 - John Matthews describes the sights, sounds and smells of his childhood

Tape: 4 Story: 5 - John Matthews reflects upon his achievements as a civil rights organizer

Tape: 5 Story: 3 - John Matthews describes how he would like to be remembered

Tape: 5 Story: 8 - John Matthews talks about his contact with the mafia

Tape: 6 Story: 1 - John Matthews recalls his presidency of the Bottle and Cork Club

Tape: 6 Story: 3 - John Matthews reflects upon his life and the importance of history

DATitle
John Matthews recalls the American Federation of Labor's discrimination against black workers
John Matthews reflects upon his civil rights accomplishments
Transcript
Now why did you decide to, to open the League of Construction Workers?$$The league? Because as I tell you before, trying to--not transfer--the unions had A Local, B Local. B Local was the fabrication shop where all the black people could work in there. But in the other high rise buildings and all that, black people couldn't work. And the A Local black people wasn't in the A Local. And the union was member of the American Federation of Labor. And that was a discriminatory union also, right. So this is where it's all starting. And then the Congress of Industrial Organizations which was founded by John L. Lewis, and then later on the CIO merged with the AF of L CIO [American Federation of Labor and Congress of Industrial Organizations (AFL-CIO)]. But the Congress of Industrial Organizations started from discrimination in the AF of L, see.$$Now what did you do? And, and you fought them as well. The AF of L.$$Yeah I fought the AF of L, I had to. Well like Michael Quill and them, they belongs to a union, which was all black. And they was affiliated with the American Federation of Labor. So have to break a lot of barriers, man, lot of barriers. It take time to sit down to remember like if you were to get me when I was sixty, would I remember all that (laughter) (simultaneous).$$(Simultaneous) You're doing a great job, you're doing a great job.$Well when you think about like the '60s [1960s] and working with Adam Clayton Powell [Adam Clayton Powell, Jr.] and the Kennedys, and of all of those things you've done, which are you most proud of?$$Well what can I tell you, I'm proud of all of them, man. I'm proud of everything that I have done. As I said to you before, probably the reason why I lived to be ninety-seven, I am wide open with everybody. I don't have no enemies that I know of. To say you don't have a enemy, you're gonna have enemy, I don't care what you do in life. But I am an open person. I like everybody, I don't care who the guy is, could be a junkie. 'Cause I never know when the junkie can help me cross the street. The same one that I don't like is the one gonna help me, right. So I have an open mind. And my life with the human race, I don't care whether you're white or you're black. To me everybody's the same. You was made by the same creator just like he put all different types of plant in the woods, different birds, different animals. And all of 'em seem together except the human being. We make discrimination against each other. So that's it.
Subscribe to Panama