Therapist and family counselor June Dobbs Butts was born on June 11, 1928 in Atlanta, Georgia. She is the youngest daughter of Irene and John Wesley Dobbs, one of Atlanta’s most prominent African American leaders before the Civil Rights Movement. Butts is also the aunt of the late Honorable Maynard Jackson, Atlanta’s first black mayor. Butts received her B.A. degree in sociology from Spelman College in 1948, setting a national education record – six sisters graduating from the same college. That same summer, Butts worked with her close friend Dr. Martin Luther King, Jr. Then, in the fall of 1948, she entered the Teacher’s College of Columbia University in New York City, where she received her Ed.D. degree in family life education.

Butts’ professional career began in 1950 as a professor in the psychology department at Fisk University. She went on to work at Tennessee State University, Howard University College of Medicine and Meharry Medical College, where she was also a researcher. While serving on the Board of Directors of Planned Parenthood in the 1970s, Butts met famed sex researchers, Masters and Johnson, who invited her to join their staff at the Reproductive Biology Research Foundation (later called Masters and Johnson Institute) in St. Louis, Missouri. There, Butts became the first African American to be trained as a sex therapist by Masters and Johnson. She later served as a visiting scientist at CDC (Centers for Disease Control & Prevention) in Atlanta.

Butts authored four book chapters on human sexuality and wrote several articles in popular magazines. Her insightful articles include Ebony magazine’s first feature piece on human sexuality, “Sex Education: Who Needs It?,” which was published in 1977. She was also the author of “Sex and the Modern Black Couple”, which appeared in Ebony in 1991; “Why Some People Consider Celibacy”, in Jet magazine in 1997; and “Spirituality and Sex: A Program for Women in Alcoholism Recovery”, which appeared in the American Journal of Health Studies in 2001. From 1980 to 1982, Butts authored Essence magazine’s most popular monthly column, “Sexual Health.”

Butts resides in Atlanta and is completing her autobiography. She is the mother of three children (one deceased), and one granddaughter.

June Dobbs Butts was interviewed by The HistoryMakers on April 13, 2006. 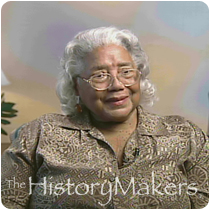 Psychology professor and sexologist June Dobbs Butts (1928 - 2019) was the first African American woman to work on the staff of the renowned Masters & Johnson Institute.

Center for Disease Control and Prevention