Dancer, social worker, dance instructor and daughter of a Buffalo Soldier, Marjorie Witt Johnson was born on March 18, 1910 in Cheyenne, Wyoming. Her father, William Henry Brown Witt, served in the United States 10th Cavalry under Colonel Charles Young at Fort D.A. Russell. Growing up, Johnson lived in Taylorville and attended Corllett School. Johnson transferred to Churchill School, Cheyenne Junior High School and graduated from Cheyenne High School in 1929. That summer Johnson’s mother, Pearl Melvina Pryor, took her to New York City where she saw her uncle Hayes Pryor perform with the Lafayette Players. High School history teacher, Eldridge Hubbard helped her gain admission into Oberlin College in 1930. Her education was donated by Cheyenne’s Women’s Club and the Searchlight Club. At Oberlin, Johnson was introduced to modern dance by Margery Schneider, and she was influenced by the work of Ruth St. Denis and Martha Graham.

Graduating from Oberlin with a B.S. degree in social work in 1935, Johnson served as a dance counselor for Camp Chippewa where she developed a talent for working with inner city girls. She formed a group called the Playhouse Settlement Dance Group. Eventually they became the Karamu Dancers as part of Karamu House. The group gained notoriety and was selected to perform at the 1940 World’s Fair in New York City. Johnson, building on Grace Coyle’s study, Democracy and Group Work, taught the girls modern dance by incorporating their own life experiences with oral history and music. Among her notable dance works are “Barbeque,” “Tea Time,” “Braham’s Rhapsody in G Minor,” “The Sermon,” and the underground railroad play, From House to House, which was performed in Nigeria as Lati Ile’ si Ile’. Two of her notable students are Royce Wallace and Roger Mae Johnson. In Atlanta, Johnson inspired Morehouse College student body president, Michael Babatunde Olatunji to play his drums in public.

Johnson has been celebrated by the City of Cleveland and numerous other organizations for her more than 70 years of service in promoting arts in education. Recently, Karamu House showcased Daughter of a Buffalo Soldier, which was directed and choreographed by Dianne McIntyre.

Johnson, who was married to the late actor, Bill Johnson, has a daughter and is still active as a community activist, role model and innovator in Cleveland. She is the author of the book, Moving Images of Courage. Johnson passed away on July 19, 2007.

Johnson was interviewed by The HistoryMakers on March 22, 2006. 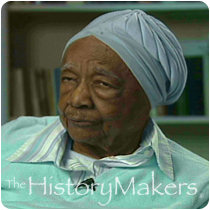 Dance instructor and dancer Marjorie Witt Johnson (1910 - 2007 ) formed a dance group that became part of Karamu House. Johnson has been celebrated by the City of Cleveland and numerous organizations for her more than 70 years of service in promoting arts in education.

<a href="https://da.thehistorymakers.org/story/361249">Tape: 1 Story: 9 - Marjorie Witt Johnson describes the sights, sounds and smells of her childhood</a>

<a href="https://da.thehistorymakers.org/story/344212">Tape: 2 Story: 8 - Marjorie Witt Johnson recalls a teacher's remarks about her complexion</a>

<a href="https://da.thehistorymakers.org/story/342325">Tape: 3 Story: 2 - Marjorie Witt Johnson remembers how she discovered her talent for dancing</a>

<a href="https://da.thehistorymakers.org/story/342326">Tape: 3 Story: 3 - Marjorie Witt Johnson recalls learning about slavery from her teacher, pt. 1</a>

<a href="https://da.thehistorymakers.org/story/342327">Tape: 3 Story: 4 - Marjorie Witt Johnson recalls learning about slavery from her teacher, pt. 2</a>

<a href="https://da.thehistorymakers.org/story/344228">Tape: 5 Story: 6 - Marjorie Witt Johnson describes 'Daughter of a Buffalo Soldier,' a dance in her honor</a>

DATitle
Marjorie Witt Johnson recalls her parents' opinion of her dancing aspirations
Marjorie Witt Johnson recalls her choreography to Johannes Brahms' 'Rhapsody in G Minor'
Transcript
Now what was your major in college [Oberlin College, Oberlin, Ohio]?$$I, I, I didn't, I got caught up with the conflict in my mind, and with what daddy [William Witt] and momma [Pearl Pryor Witt] thought about it because when I went out there at, at Christmastime, and said to them, "I thought I'd like to, to follow the dance world." And daddy got, got angry, very angry. He said, "I thought you wanted to be somebody." I said, "I will be somebody." And, and mother said, "We hadn't thought about it--dancing as somebody." And I was simply disappointed that they did not see what I saw, and, so I said, I don't know. And then, that's when I began to falter in directions, and not knowing what I was going to do, and, and but I still steadily went on. And, and it was through meeting Corrine's [Corrine Johnson Falope] father, Bill Johnson, who was an outstanding actor, and, and when I told him about the dancing and my folks' disappointment, he said, "Well, why don't you go ahead and be, be a dancer and, and be good at it? But I don't know about jobs for it at all." I said, "No, I'll find them." I said, "Look at the theatre." He said, "Well, the theatre is different." And I knew it was because my uncle [Hayes Pryor] was, and I liked what he had in it, you know. And then, so, this, the fellow--well, maybe, and I had, was liking him, that maybe by marrying him, and going ahead at, with my, with my life and drama and dance, I could make it. But I got really confused, and I got lost in the, in the, in the, in the making the decision. And it was the teachers when you went, met at their homes, and they would say, there are other opportunities, and then, that's when they told me about Karamu--$$Okay.$$--and the possibility.$$(CORRINE JOHNSON FALOPE): But it wasn't Karamu in those days. It was Settlement House [sic. Playhouse Settlement; Karamu House, Cleveland, Ohio].$$It, it was a settlement at that--$Now, you did one dance to Brahms' [Johannes Brahms] 'Rhapsody'--$$'In G minor' ['Rhapsody in G Minor'].$$'In G minor,' okay.$$That came about because the girls, at first, didn't like what they call, high class music. But the girl who played for them girls, she said, "But have you ever heard Brahms' 'Rhapsody in, in G minor'?" "No, no other kind of rhapsody, they'd say." And so, she played it. And then, they begin to take off on the, the beat--there's got a beat to it. Oh, and, and they were just mimicking the sounds and how it made them feel. And I said, "Look, you know, that's the dance." And, and, slowly and surely, I would get them to see it in choreography. And as it came more alive to them, they got, so that they would hear what they wanted to hear, and they would move to what make sense to them. And when I saw that, then I knew I had a real dance. And so, when the girl [Lois A. Perry] played, she was a great musician, played Brahms' 'Rhapsody in G Minor,' and she came to a part in it where they was emphasizing the base (unclear), that they would do certain movements. And, and it went on as she played, and the more she played Brahms' 'Rhapsody,' the more they loved it. And so, it became one of the pieces. And we didn't change it, give it no name, but just let their movements tell the story of how they felt.
Subscribe to Cheyenne