Azira Gonzalez Hill, referred to as Atlanta’s Angel for her works as a civil rights activist and nurse, was born in Holguin, Cuba, on October 28, 1923, to a large working class family of eight siblings. As a young woman, Hill worked diligently as a student to provide opportunities that would enable her to flourish outside of Cuba; because of her academic achievements, she was finally afforded the opportunity to come to the United States to study through her church. Hill attended Bethune Cookman, Morris Brown, and Georgia State University, ultimately becoming a registered nurse. Hill married Jesse Hill, a prominent civil rights figure, with whom she had two daughters.

Hill has received awards from the Association of the National Negro Musicians for promoting Black music and musicians, and the Martin Luther King Federal Commission for her service. Hill also received the Golden Rule Award for community service from J.C. Penney; the Ralph Bunche Middle School Medal; the School Nurses Association for Merit and Distinction; the Lexus Leader of the Arts Award; and a Mercy Care Award for Service.

It's Going To Get Better. 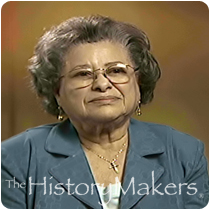 Civil rights activist and registered nurse Azira Gonzalez Sanchez Hill (1923 - ) has had a long and prolific career in Atlanta in the areas of school health care and civil rights. After her retirement, Hill became involved in various philanthropic endeavors, most notably her involvement with the Atlanta Symphony Orchestra, for which she was named a lifetime director in 2008.

Tape: 3 Story: 3 - Azira Gonzalez Sanchez Hill remembers having her two children while working as a nurse

Tape: 4 Story: 8 - Azira Gonzalez Sanchez Hill describes how she would like to be remembered

DATitle
Azira Gonzalez Sanchez Hill remembers her childhood in Holguin, Cuba
Azira Gonzalez Sanchez Hill recalls her and her husband's involvement in the Civil Rights Movement
Transcript
In terms of early memories, can you describe what family life was like when you were in Cuba--holidays, special events, or just daily life in your neighborhood?$$In the neighborhood, we had a pretty large house. And my brothers played all kinds of instruments. And so that she [Hill's mother, Dominga Sanchez Gonzalez] could control us, I suppose, we were not allowed to go out too much. But the neighborhood could come to our house, and so, they would come and play music. At that time, there was no radio. We didn't have any radio, but they did--I had, I had plenty of music--all kinds, not just salsa, and all these other thing. But I knew [Johann Sebastian] Bach, and [Ludwig van] Beethoven, and all that, 'cause my brothers were, you know, serious musicians, and that was fun. And some days, we read poetry, and play music, and everybody play, and had a good time. And holidays are wonderful, because, you know, everybody come. If you were a friend of any of my brothers, you could come to my house, and that was fun. And there was only one family that I was allowed to go to, and they were three sisters. Since I didn't have much--I had a sister about ten years younger than I, so we were not peers, you know. And so, that she would allow me to, you know, interact with those, that family that had these three daughters. And that was fun. In fact then, we all married in the same dress (laughter).$If you could, share with me, maybe, the name of some of the associations that you belong to professionally.$$Oh, I've done so many things. I, you know, during the Civil Rights Movement, you know, I didn't have any other choice but to join. My husband, [Jesse] Hill, was chair of the All-Citizens Registration Committee, so I became a registrar, and, you know, could register people to vote. And so, we used to go to churches, and mass meetings, and places like that, and register to vote people. Then, when [HistoryMaker] Charlayne [Hunter-Gault] and Hamilton [Holmes]'s application, and all the turmoil and went through that, you know, I was there, you know, fixing foods, and just being there. You had to support your husband. Political rallies, and mass meetings, and all that. The only thing I didn't do was to--I didn't march. Only one time, and that was the demonstration on the [Boisfeuillet Jones Atlanta] Civic Center [Atlanta, Georgia] at something about they tried to integrate the dentists' professional meeting that they were having there. And other than that, I would--did sit-ins, Mrs. [Otelia Hackney] Russell and I, you know, went to, used to be, store across the street from The Ritz-Carlton [Atlanta, Georgia]--I can't remember the name now, but they had a restaurant and Macy's--$$Which is--$$--but anyway, they--we just went inside in their dining room. And when we got there, they didn't serve us--they just closed. They closed the dining room, so we just got up and left. And then, there was in Lenox Square [Atlanta, Georgia], there was another restaurant, and we did that, too. And the third one was (unclear) that was in Locust Street, and that was the only one that I really got upset and frightened (laughter), because we were--it was a delicatessen. And so, we were trying to get in to order--it was sandwiches and things--and the police came. And the minute police came, I have to go--I couldn't, I just could not. Well, [Jesse] Hill and I had made the promise to each other that we would not get arrested, because--well, I'm a foreigner, you know, I could be deported. At that time, I don't think I was even a citizen. And then, too, the girls [Nancy Hill Cook and Azira Hill Kendall] were small, and we didn't have any relatives in town, so somebody had to be, you know, there to--over them. In addition to that, he was the contact person to bail out those that were arrested. So, he couldn't be arrested himself. So, that was one of the arrangements that, you know, that were made beforehand.
Subscribe to Holguin