Marketing executive and newspaper publishing executive Melvin Hart was born on January 7, 1952 to Cleola Kimpson Hart, a homemaker and Furman “Toot” Hart. Furman is a World War II veteran, former member of the Civilian Conservation Corps and one of the founders of the local branch of the NAACP in St. Matthews, South Carolina. Hart attended Guinyard, a segregated African American elementary school. When he reached the eighth grade, Hart became one of a small group of African American students to integrate Saint Matthews High School. In 1970, Hart was one of five African Americans, out of a class of approximately seventy-five students, to graduate from St. Matthews.

Active in his church and community, Hart was re-appointed to the Historic Columbia Foundation Board of Trustees for 2005 and 2006, his second term.

Melvin Hart was interviewed by the HistoryMakers on July 14, 2005

Stay Here Until I Get Back. 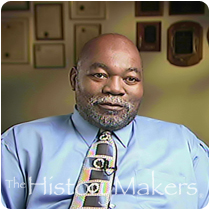 Marketing executive and newspaper publishing executive Melvin Hart (1952 - ) was the manager and director of marketing for the Black Media Group as well as publisher of South Carolina's weekly African American newspaper, Black News.

Tape: 1 Story: 7 - Melvin Hart describes how his parents met and their childhood

Tape: 1 Story: 8 - Melvin Hart describes his parents' personalities and who he takes after