Entrepreneur Walter Theodore Hayden was born June 24, 1926, in Tuskegee, Alabama, where his father, Rev. Charles Hayden of Greenwood, Mississippi, was chaplain of Tuskegee University. Hayden attended Hudson Elementary School in Birmingham, Alabama, and graduated from Birmingham’s Parker High School in 1944; he was a pre-med student at Indiana University from 1944 to 1947.

In the mid-1950s, Hayden was a driver and broker for PR & R Trucking Company in Birmingham. From 1961 to 1964, Hayden was the owner and operator of Birmingham’s Star Bowl bowling lanes. Star Bowl became a meeting place and a secret sheltering place for civil rights workers during the Civil Rights Movement in Birmingham. In 1964, Hayden moved to Fort Wayne, Indiana, where he started Diamond Printing; soon thereafter, he began printing and distributing his own line of African American oriented greeting cards. In 1995, Hayden founded Fort Wayne Black Pages Business Directory.

A lifetime member of the NAACP, Hayden was also a member of the Urban League for twenty years, and for over sixty years was a member of the A.M.E. church. Hayden and his wife, Ernestine, remained in Fort Wayne where they raised nine children. 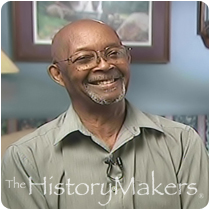 Leisure entrepreneur and printing entrepreneur Walter Theodore Hayden (1926 - ) was once owner of the Star Bowl, which served as a meeting place in Birmingham, Alabama, for civil rights workers during the Civil Rights Movement. After moving to Fort Wayne, Indiana, Hayden founded Diamond Printing; created his own line of African American greeting cards; and began publishing the Fort Wayne Black Pages Business Directory.

Tape: 3 Story: 4 - Walter Theodore Hayden explains why he chose not to become a minister

Tape: 5 Story: 1 - Walter Theodore Hayden talks about why he left Birmingham, Alabama in 1964

Tape: 7 Story: 2 - Walter Theodore Hayden reflects upon his relationship with his parents

Tape: 7 Story: 4 - Walter Theodore Hayden describes how he would like to be remembered