High school and college football coach and athletic director Donald Edward Hudson was born on November 20, 1929, and raised in Pittsburgh, Pennsylvania. He graduated from Westinghouse High School in Pittsburgh, where he participated in football and gymnastics. He went on to play football at Lincoln University in Jefferson City, Missouri, where, in 1953, he received his B.S. degree in physical education and commission as a second lieutenant in the United States Army Engineers.

Hudson served his military obligation at Fort Leonard Wood, Missouri as a platoon leader for the first eight weeks of basic training. He then spent the next year and a half on the DMZ in Korea, where he served as a first lieutenant platoon leader. After military service, he earned his M.Ed. degree from Springfield College in Springfield, Massachusetts.

In December of 1971, Hudson was appointed head football coach of Macalester College in Saint Paul, Minnesota, becoming the first African American head football coach at a predominantly white university in the United States in the modern NCAA era. He also served as assistant chairman of the Department of Physical Education and as the men’s head track coach. While at Macalester, he testified before the U.S. Congress on behalf of the NCAA National Summer Youth Program, which he also directed for six years.

Hudson left Macalester College in 1975 and returned to Lincoln University in 1976, where he served as head football coach, head girls track coach, and athletic director for three years. He was later hired as athletic director of Smoky Hill High School in the Colorado Cherry Creek school district, where he worked until 2000.

Hudson was honored for his accomplishments during the half time of a Macalester football game on October 6, 2007. The mayor of St. Paul, Minnesota declared that day “Don Hudson Day” and Hudson was given the keys to the city. In addition, the football offices at Macalester College have been named after Hudson.

Hudson and his wife, Constance, reside in Charlotte, North Carolina. They have six children, ten grandchildren and two great-grandchildren.

Donald Hudson was interviewed by The HistoryMakers on August 12, 2014.

Let's Do It Over Again. 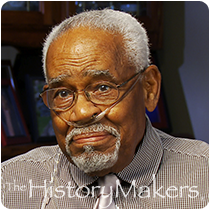 College football coach Donald Hudson (1929 - 2018 ) served as the head football coach of Macalester College from 1971. He was the first African American head coach at a predominantly white university in the modern NCAA era.

Tape: 1 Story: 9 - Donald Hudson describes his likeness to his mother

Distinguished athlete and coach William Maurice Bennett was born on October 15, 1915 in Richmond, Virginia. His mother worked in a tobacco factory and his father was a barber. His parents separated when he was a small child and his mother moved to Hampton and remarried. Bennett received his early education in Richmond at the Moore Street school until he moved to Hampton to live with his mother. He earned his high school diploma from I.C. Norcom High School in Portsmouth, Virginia, where he was a stellar a track and football athlete. While in high school he set a state record for the 440 that stood for twenty years.

Following his high school graduation, Bennett attended Virginia State University on a football scholarship. While at VSU, Bennett won two CIAA track championships, honors in the Penn Relays, three varsity letters in football and was selected to play in the College All-Star game against the Chicago Bears in 1941. Bennett received his bachelor’s of science degree in physical education in 1941. That same year he was also drafted into the army and stationed at Ft. Lee, Virginia. He served in the military until 1945, and while a soldier he developed an interest in boxing and was named the lightweight boxing champion. Following his honorable discharge from the army, Bennett earned his masters degree in education from Columbia University in 1946.

Shortly after marrying in 1946, Bennett received a job as a biology teacher and football coach at Phenix High School in Hampton, Virginia. He left Phenix in 1953 when he was offered the head football and track coach position at his alma matter Virginia State.

Bennett coached football and track at Virginia State for over thirty years, a duration in which he coached nearly 50 All-Americans including Wilber “Pony” Wilson. In 1954, under Bennett’s leadership, Wilson broke the long jump record and qualified for the Olympic Trials. Bennett also led the VSU Trojans to victory in ten conference championships and two CIAA championships. Bennett was named Coach of the Year in 1962, 1972, 1977, 1979 and 1983. In 1982, Bennett was inducted into the CIAA Hall of Fame. 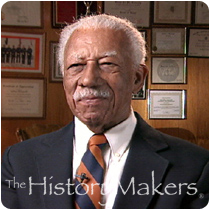 Tape: 2 Story: 1 - William Maurice Bennett describes his childhood interest in sports and living in Portsmouth, Virginia as a teenager

Tape: 2 Story: 6 - William Maurice Bennett recalls graduating Virginia State College in Petersburg, Virginia in 1941 with plans to be a teacher

Tape: 2 Story: 7 - William Maurice Bennett describes being drafted into the U.S. Army and boxing while in the Army

Tape: 3 Story: 2 - William Maurice Bennett talks about being a coach and teacher at George P. Phenix School in Hampton, Virginia

Tape: 3 Story: 3 - William Maurice Bennett talks about being hired as a coach by Virginia State College in Petersburg, Virginia

Tape: 3 Story: 9 - William Maurice Bennett reflects upon his successes as a coach

Tape: 4 Story: 1 - William Maurice Bennett describes what he looks for in a potential athlete

Tape: 4 Story: 3 - William Maurice Bennett reflects upon the quality of the athletic programs at historically black colleges and universities

Tape: 4 Story: 4 - William Maurice Bennett talks about the benefits and shortfalls of attending a historically black college or university

Tape: 4 Story: 5 - William Maurice Bennett reflects upon how to measure a coach's success

Tape: 4 Story: 6 - William Maurice Bennett describes how he would like to be remembered