Attorney and social justice activist Allie Latimer was born in the 1930s in Coraopolis, Pennsylvania. Growing up in Alabama, her mother was a schoolteacher and her father was a builder. She attended the Alabama State Lab High School where she earned her high school diploma in the 1940s.

Latimer attended Barber-Scotia College in Concord, North Carolina, for a year and then transferred to Hampton Institute in Virginia where she earned her bachelor’s of science degree. While at Hampton, she was active with the drama club and dance team.Upon graduation Latimer joined the American Friends in Service, which is part of the Quaker International Volunteer Service program and worked at a women’s prison in New Jersey. She later traveled to France with the same group as part of a peace rebuilding mission.

In the 1950s, Latimer attended Howard University Law School where she earned her law degree. She has also received a LL.M degree from Catholic University and M. Div. and D.Min from Howard University School of Divinity. In 1969, she became an Ordained Elder at Northeastern Presbyterian Church in Washington, D.C.

In 1968, Latimer organized and founded Federally Employed Women, a national organization, which has more than 200 chapters today. After working in private practice for several years, she joined the General Services Administration (GSA) in the early 1970s as an assistant general counsel. In 1976, Latimer left GSA to serve as an assistant general counsel for National Aeronautics and Space Administration (NASA). In 1977, she returned to the GSA and made history when she became the first woman and African American to serve as general counsel of a major federal agency. She held that post for ten years until she moved on to serve as Special Counsel for Ethics and Civil Rights at GSA from 1987-1995.

In 1998, Latimer was awarded the prestigious Ollie May Cooper Award for her legal and humanitarian achievements.

You have to think about yourself because no one wakes up in the morning with you on their mind. 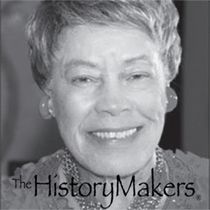 Social activist and government lawyer Allie B. Latimer (1928 - ) is the founder of the Federally Employed Women organization and has served as counsel for various government agencies, including NASA. She became the first woman and African American to serve as general counsel of a major federal agency during her tenure with the General Services Administration.

Tape: 1 Story: 7 - Allie Latimer talks about her siblings and grandmother

Tape: 4 Story: 4 - Allie Latimer shares her concerns for the black community and reflects on her life